London based physical theatre company, Incognito Theatre, take the use of body language to a whole new level with their new production ‘The Net Kill’. Opening with a hilarious scene about the invention of the badminton, The Net Kill was destined to follow a brilliantly bonkers storyline. Following the quest of a stereotypically posh badminton team, audiences are assured to be immersed during the whole performance due to Incognito’s inventive way of storytelling. This truly is a company which moves as if they’re all members of the same body.

The backstories they provided each character with, and their quirky personalities had the audience laughing for the whole duration (unsurprising due to the comical over exaggerated voices utilised)! Each joke was delivered at such a creative timing, never failing to amuse me as even the relationship between the characters alone made the show a joy to watch. I was in awe also of the way they tackled the art of multi-roling, managing to contort their physicality and accent in a matter of seconds to introduce a new character – an absolutely mind-blowing performance by incredibly talented actors!

Without a doubt, it was Incognito’s movement which made it a performance like no other!  Their admirable physicality was the key component that had my belly aching with laughter, and it just worked perfectly (if you can’t tell – I loved it)! All the company needed was the bare minimum props for the audience to believe they were following ‘a quest’ and that shows true artistic talent. Credit must of course also go to the sound and lighting designers who enhanced and underscored the production flawlessly.

If you’re not already tempted to go and buy tickets to ‘The Net Kill’ then GO, it is amazing for all demographics, and I promise you will not be disappointed! It’ll leave you in stitches for the rest of your day (in the best way possible!) and will open your mind to a whole new world of physicality. Outrageously funny and bazaar, Incognito Theatre company have devised an innovative form of theatre which would be a crime to miss! 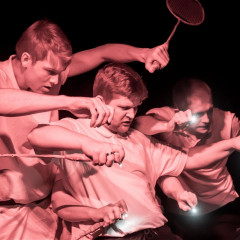