Written and directed by Mark C. Hewitt, Prison Dialogues offers a series of episodes from both a male and female prison institution focusing on the conversations being behind bars can promote, many of which develop to becoming quite philosophical.

Opening with a long ominous silence between Sonny Jaiteh (playing French) and Connor Mills (playing Clamp), the audience are first introduced to the boredom of prison life and in a way the loneliness of it. The strength of connections in prison seems to be a very strong theme within this piece as we see how much the characters rely on one another’s company. French begins the initial dialogue by stating “a man who doesn’t know he’s in prison can never escape” – a thought provoking quote which says a lot about the society and system we live within.

The whole piece really seems to reflect upon the power of language yet at the same time capturing the importance of silence and thoughts, providing a minimalistic yet powerful insight into the philosophy and psychology of prison life. This is not a show however which is completely dark and philosophical, in fact, it has the perfect combination of humour (mostly provided by Zara, played by Araba Jane) and severity making it an engaging and eye-opening watch. Each character has a completely differing personality and back story which we discover more of throughout the play as they represent microcosms of prisoners. Lydia (played by the talented Leann O’Kasi) is a demonstration of those who are mothers behind bars and the hardships that can obviously bring – O’Kasi embodies this role extremely well!

Additionally, I must applaud Sarah J. Lewis who is undoubtedly an incredible performer. Her commitment to the role of Gabi, a hot headed yet deep thinker is extremely admirable. Everything from her body language to her vocal techniques made me really believe that I was watching genuine interactions which were taking place within institutions. There didn’t need to be any set to believe the story, the props simply enhanced it.

Prison Dialogues encourages a much-needed sympathy for most prisoners and removes the stigma which surrounds them. I have no hesitation in claiming that this show deserves a much larger audience so be sure to see it before it’s too late! 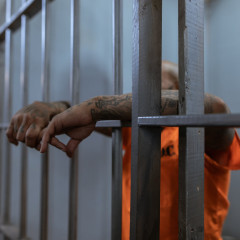