Ah, Berkoff. My old enemy. Countless hours have I spent frollicking around stages, trying to perform in Berkoff's beloved theatrical style of 'Total Theatre' - looking like a Total Tit. Stemming from Artaud's 'Theatre of Cruelty', which itself came out of the surrealist movement, Total Theatre is a synergy of stylised movement and dialogue, combined for the purpose of creating poignant experiences for audience members. Arguably one of the hardest styles to perform in, demanding complete vocal and physical control from actors, when watching a Total Theatre performance not done correctly, in the words of a 13 year old girl, it is simply #awkward. So thank the Theatre Gods that Snowdrop Productions did do it correctly.

Snowdrop Production's energetic and quirky version of East, with a few of their own scenes thrown in, was a true piece of ensemble theatre, with the actors accomplishing spectacular movement pieces, working wonders for the audience. Masterfully establishing the weird and wonderful world of the play, allowing the idiosyncrasies to become normality for the audience, the actors' performances flourished amongst the ingenious direction, by Alan Perrin.

With little storyline, the piece is mostly driven by its themes - the most predominant of which being the male and female perspectives of sex, most powerfully shown in one of Sylv's monologues, utilising its dark humour and potent comments of predatory male behaviour, Tegen Hitchen's commanding performance was raw and unsullied.

My only criticism would be that the whole play seemed to be too much of a joke to be a true Berkoff performance for me, prioritising the comedy over cogency. As an audience member, I laughed, I was amazed, I was engaged and so much more, but I didn't quite get the 'slap in the face, stood on some Lego, flush your phone down the toilet' feeling that all Berkoff performances should strive towards. For me, the hard hitting, didn't quite hit hard enough.

But overall, boundaries are pushed, lines are scrubbed out and thin ice becomes thick, as these five actors seduce the audience into their esoteric world, unafraid and unfiltered, their performances a true testament to what ensemble theatre can achieve. A highly recommended piece of theatre. 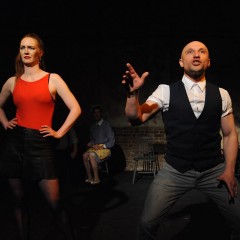