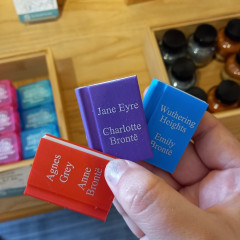 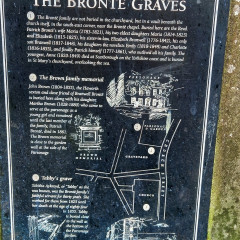 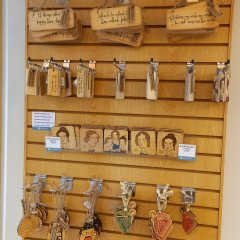 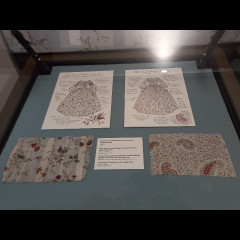 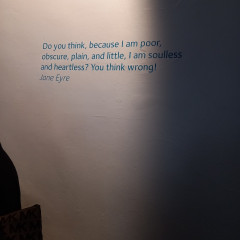 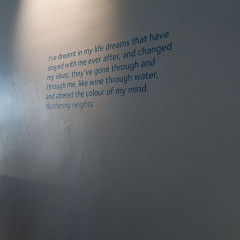 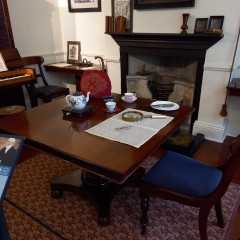 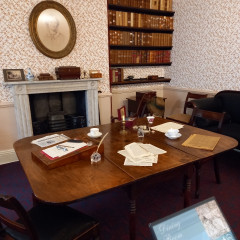 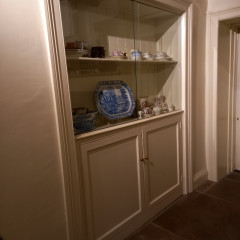 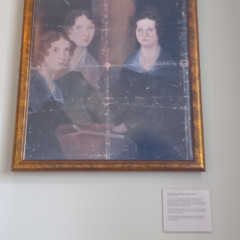 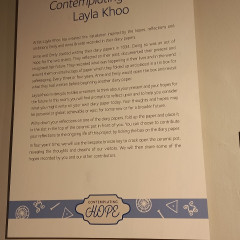 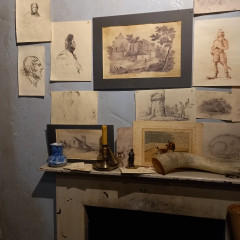 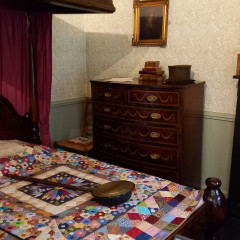 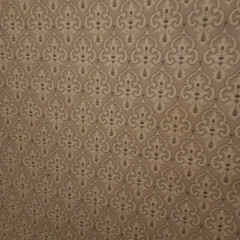 I walked up to the Museum via a steep cobbled path that had many amazing shops. Once I got there, the staff that worked there were very helpful and showed me where the toilets were as well as giving me a general guide on how to get around the museum. I walked into the entrance hall and went to the first room which was Mr Bronte's study, this room was a lovely room with an especially large magnifying glass on the table. There were many pictures decorating this study and I loved how vintage it was. I learnt that this was the room Mr Bronte used to give his children lessons in.

The next room I saw was the dining room, the room was decorated nicely and I loved the wallpaper within this room. I learnt that the Bronte sisters did most of their writing there and that their world famous novels were written in that very room. Something that shocked me was that it is believed that Emily Bronte died on the sofa seen in the dining room. I then saw the kitchen, this room made me imagine them sitting in this room and waiting for their bread to bake, what enabled me this imagination was the bonnet displayed on the top of one of the chairs. I enjoyed imagining what chores they might have been doing in this room that they would have been asked to do by their father. I then saw Mr Nicholl's Study, Mr Nicholl is who Charlotte Bronte married. I liked the wallpaper in this room as it was very regal looking, I enjoyed seeing the items displayed in the glass cabinet and within this room was also a Manuscript of the Wuthering Heights which was recreated by visitors who were invited by Clare Twomey. The next thing I saw was the Grandfather Clock on the stairs as well as a painting of the three sisters which was painted by Branwell, their brother. I found it very sad that he included himself but then later decided to erase himself, leaving a shadowy figure in the background.

I then went into the room that had the contemplating hope exhibit, I spent some time writing out my hopes and then placed this in the May ceramic Jar. This was a great exhibit as it allowed people to contemplate on what they hoped for in their future whilst also thinking about the problems in the world. I then went to see Charlotte's room which showcased some of her clothes and accessories that she would have worn/used when she was alive. I loved seeing the shawl and bonnet she wore on her wedding day. I learnt that this was the room she died in and that it is now used to display her belongings. It was very interesting to see what women wore in the eighteenth and nineteenth century, I loved how decorative the shawls were. I then saw the children's study, this was a small room and this is where I finally noticed the other contemplating hope jars and I then could see that there were showcased in all the rooms after the months went by as the children's study had the March jar in it. I loved that there was a few contemplating hope signs in the rooms that made you think more about stuff within those rooms. I then saw Mr Bronte's bedroom which is where he put Branwell when his alcohol addiction worsened so this is the room where Branwell died at the age of 31 in 1848. I feel sorry for Branwell as he could have done really well within the arts sector if he hadn't of succumbed to alcohol. I liked the duvet and bed in this room as there were both very unique. Once again, this is another room that had some lovely wallpaper.

I then went to see Branwell's room, this room is a dramatic reimagining curated by Simon Armitage. I loved this room as it allowed me to see what type of man Branwell was before he became an alcoholic. I liked how messy yet organised this room was and it showed how creative Branwell was. I then went into the room where there was a Bronte exhibition that showed me their journey. I found this room very, very interesting and it allowed me to further understand who the Bronte family was, I believe that you would have to see this room for yourself to fully understand their story. Within this room were some interactive bits for children which I also used as it was a great way to interactively learn about the Bronte's. Something I loved was how the Bronte sisters had made some fantasy books for the toy soldiers to read and it amazed me how small the writing was back then as I believe paper was somewhat limited back then. I then saw the Defying expectations: inside Charlotte Bronte's Wardrobe exhibition. I found it fascinating to see what colourful outfits Charlotte would have worn, I especially loved the illustrated drawings of the dresses she would have worn which showed me what went into those dresses.

Lastly, I then saw the gift shop where I bought the cutest novel erasers that were small books with the famous novel's names on them from all 3 sisters. I loved the variety of different items you could buy in the gift shop and all of the items were very well made. I especially loved the look of the exclusive resin model replica's of Jocelyn Horner's bronze sculpture of the sisters which can be viewed in the courtyard of the museum. I then had a small walk around where I saw an information board telling me where the Bronte family are buried, it told me that all of them except Anne are buried in a vault beneath the church itself and that Anne died at Scarborough so is buried in St Mary's churchyard, overlooking the sea. I found it extremely interesting to find out that they are under the church and not inside the church yard where you would think you would find them.

I would love to thank Blaze and Voice Mag for allowing me this experience of such a lovely place! Howarth is a fantastic place to visit and I recommend others to go and see Howarth as well as the amazing Bronte Parsonage Museum!

There is an admission fee.

The Bronte Parsonage Museum is open on Wednesday, Thursday, Friday, Saturday and Sunday at 10am till 5pm. The Museum can be found at Church Street, Howarth, Keighley  BD22 8DR. 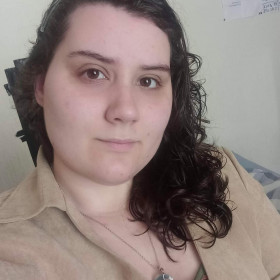 I am 19 years old, I study animals but I am very much interested in the arts. My hobbies include reading and swimming.