Driven to action by recent reports on the inevitability of climate change, the group has resumed activity after a pandemic related hiatus. The scheduled protests officially begin on the 23rd of August. However, around 200 Extinction Rebellion activists protested outside the Guildhall entrance in Central London on the 22nd, releasing flares and scaling the front of the building.

One representative of the activist organisation stated, ‘to save our environment we have to try and understand how we’ve got into the position where we’ve known for nearly four decades that the way we live  our lives has an impact on the world.’

The demonstration ended around 8 pm, and nine protesters were arrested.

Extinction Rebellion (or XR for short) operates under two central tenets: non-violent disruption and inclusion. The group believes that everyone, through a collective effort, must combat climate change, regardless of political affiliation. They also believe that protests that do not cause disruption are ineffective as they can be ignored.

With this attitude, XR plans to operate throughout the City of London financial district for the next two weeks. The aim will be to put pressure on the government to ramp up their climate change promises, such as committing to reaching net-zero carbon emissions by 2026 rather than their current target of 2050.

The Metropolitan Police Force has already condemned the protests, stating ‘it is clear to us, from reading and listening to their public announcements that Extinction Rebellion’s intention is to once again cause significant disruption to London and to London’s communities through acts of civil disobedience’.

With the controversial Police Bill placing increased restrictions on the people’s ability to protest, The Supreme Court’s Ziegler Judgement — which rules that exercising the right to protest may pass as a ‘lawful excuse’ to disrupt traffic — may provide some protection for the demonstrators. However, deputy assistant commissioner Matt Twist of The Metropolitan Police Force has stated that they still retain the right to take action against what they believe to be ‘willful obstruction which is unreasonable’.

A spokesperson for XR has said that the movement will consist of thousands of activists. It remains to be seen what impact they will have. With the upcoming COP26 to be held in Glasgow, much attention will be drawn to the UK’s commitments to negating the widespread and harmful disruption of Climate Change. 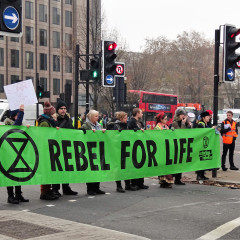