The musical phenomenon that just keeps on giving, Six is something special, putting the story of Henry VIII's wives into their own hands.

Six debuted at the Edinburgh Fringe back in 2017, and has gone on to be performed at the West End in London, and most recently, Broadway itself. God damn does it deserve it. With more style than the entirety of 16th century England (and that's a high bar to leap), this show rips the stories of King Henry VIII's six wives right from the rhyme and into the ready hands of the women themselves, who deliver a righteous performance that goes through their life history, and their hopes, conflicts, and personalities. Obviously it isn't a carbon copy of the history books. They tell their stories with added flair and a modern twist, with the characters forming a pop group and arguing over who should be the lead singer.

This conceit brings a lot to the show, it's really the core of its main message. Henry VIII was a dumpster-fire of a human being. Arrogant, vicious, and with a total disregard for human life, he was pretty much the embodiment of a successful monarch. Of course, he's the guy we all know. We learn about him in school, read about him in history books, and see him portrayed in movies and TV. His wives are generally confined to a footnote, or more commonly, a rhyme. Divorced, beheaded, and died. Divorced, beheaded, survived. So of course, when the wives meet up in Six, and they're trying to decide who should be the lead singer of their pop-group, they build their cases around who has suffered the most. Because, really that's all they're known for, as victims. So they've internalised that, even to the extent that they'll put down each other for the sake of being victim number 1.

They make their cases through individual songs, highlighting an aspect of themselves and how they've been hurt by the world and more specifically good old Horrid Henry. I sorely wish I could talk about all the songs — I'm not kidding you, there's not a single weak number amongst them — but the most amazing performance comes from Katherine Howard in her song 'All You Wanna Do'. To be even more specific, I'm talking about the Broadway version starring Samantha Pauly, she kills it. The lyrics are masterful. They start off cheeky and fun, and that's exactly how Pauly plays it. But then, through just slight tweaks in the way the sentences are structured, the lyrics (even when they're repeated word for word) take on completely new and viscerally devastating meanings. In the original West End performance, it is sung beautifully, but Pualy brings a whole new layer to the performance. Voice cracks, tiny explosions of emotion, a perfect display of heartbreaking epiphany as we see here realise just how awful her life has been beneath the surface, it is truly spectacular and may be the single best performance in a musical number of all time.

The choreography too is breathtaking, she starts out moving along with the rest of the characters like a confident centrepiece, but as the song progresses they begin to close in on her, and it feels more like she is being jerked back and forth — which is harrowingly concomitant with the content of her lyrics. I mean, come on. How can a single song showcase so much raw talent in so many different areas of artistic expression? I haven't even mentioned the costumes and how funny the show is.

But back to my original point. The message becomes clear by the end of the performance, when the wives stop competing and realise that they are so much more than their suffering. It's a beautiful moment, wonderfully told. They are stronger when they support each other, it's their lives and they can't let it be defined by one evil monarch.

Six is a bop-ridden, bombastic, tour-de-force that'll have you in stitches one moment and then slap you across the face with its striking emotional highlights the next. 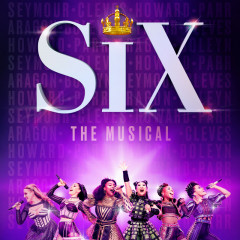 The musical phenomenon that just keeps on giving, Six is something special, putting the story of Henry VIII's wives into their own hands.