James Euringer, lead vocalist and songwriter of the band Mindless Self Indulgence has recently been accused and sued for alleged sexual assault of a then 15-year-old girl who was in a 2 year relationship with the musician. The lawsuit was filed in New York Supreme Court on Monday.

At the time of the supposed relationship – between 1997 and 1999 – Euringer would have been 27. The suit states that Euringer had groomed and manipulated the young girl into sexual acts by claiming that she was protecting other girls from a similar fate. Other defendants in the suit include Warner Group Corp, their parent company Warner Communications LLC, Elektra Entertainment Group (Mindless Self Indulgence’s previous label) and manager/producer Joseph Galus, who have also been accused of letting this happen without intervention.

The lawsuit goes into specific detail about the alleged relationship. It states that Euringer had known of the plaintiff’s age from the start, and had given her a fake ID so that she could attend shows with him and drink alcohol. He would request that their relationship be a secret, for her not to act affectionately in public, whilst also asking that she send indecent pictures of herself and  “act like a small child” for him, by drooling, sucking on her thumb and peeing her pants. Elektra would also develop T-shirts that featured the victim whilst still a minor for the band to sell on tours.

The electropunk group has been known to use shock tactics to get ahead, in one disturbing instance, advertising for a drummer position in a “band of pedophiles” in 1996. Their first record, Tight, displayed what seemed to be a young girl's underwear in the artwork, with songs that described Euringer’s pedophillic tendencies, although apparently not acted upon. 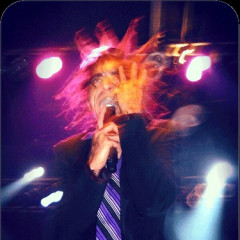