A new record printing press is set to open in Middlesbrough soon, in a move that will bring much needed capacity to an industry struggling to keep up with vinyl demands.

Press On Vinyl, first announced in April 2021 is soon to open in Tees-Advance Manufacturing Park. The company aims to alleviate the pressure felt by smaller artists by dedicating themselves to independent musicians, small-run releases, and performers who are local to their area.

The company aims to press 50,000 records a month, which is set to increase as more pressing machines are acquired. You Say She's Satisfied, the debut EP from local Teesside based indie-pop group Komparrison, will be the first record that they produce.

When interviewed by ITV, Press On Vinyl co-founder David Todd said: “The demand for vinyl from music fans has increased massively over the last five to six years but the global capacity hasn’t increased with that so over the whole world there’s a massive shortage of pressing plants who can provide the capacity for the labels and the artists.”

The British Phonographic Industry announced that vinyl sales reached their highest level in 30 years during 2021. The vinyl record format reportedly made up 23% of albums sold last year, and in the UK, sales rose by a third, amounting to £86.5 million.

This increased demand has proved difficult for pressing plants to meet, due to an overwhelming number of orders and a limited amount of production materials. Both major and independent releases have been hit hard by the delays.

Major label artists such as Adele, ABBA, Ed Sheeran and Elton John have helped to snap up bulk production positions for vinyl records during the back-end of last year, leaving smaller artists and independent musicians on a long waiting list for their vinyl pressings. In November, Sony ordered 500,000 pressings of Adele’s 30, so that they could be released in conjunction with the record’s digital release. This drew criticism from labels, artists and fans alike, who claimed that they were monopolising production and hindering less established musicians.

Not everyone blames major labels though, rather the distribution and economy of vinyl itself, as it is easier and cheaper for record plants to press large quantities of records in bulk. The metalworking and lacquering of a sample record is required to press each bulk of records, It is a time-consuming process, so the gravitation towards bulk pressings of popular albums and reissues is understandable in an economic sense. With demand consistently increasing, the smaller plants that originally focused on independent and lesser known artists, are now choosing to press the major label releases due to their overspill and ease of pressing.

Josh Cohen, owner of the record label Memorials of Distinction, told NME not to blame Adele for the shortages, saying: “I can see why people would blame Adele, she’s an easy target, but leave Adele alone. It’s not her fault. We’re all just trying to make money at the end of the day.”

Cohen instead pointed towards the lack of revenue that streaming gives artists,“If you want to make any kind of return on your investment, then vinyl is the only game in town. If Spotify or YouTube were more equitable, we wouldn’t be so reliant on these discs made of crude oil. It’s a weird thing.”

Hopefully Press On Vinyl will bring much needed aid to struggling independent musicians, and can start working through the hefty backlog quickly to get their music pressed to vinyl in time for releases. As vinyl is such a prominent source of finance for artists, it is important that upcoming musicians don't lose out on the valuable revenue stream. Artists need to have their records pressed in time for tours and to coincide with digital releases to reap the most profit.

As great as it is to see vinyl rising in popularity, the industry is in dire need of quick reaction to the landscape. The opening of Press On Vinyl will be a huge step forward in alleviating the trouble caused by both the pandemic and recent demand spike, and is some rare positive news in amongst the many issues still plaguing the UKs post-Brexit music industry. 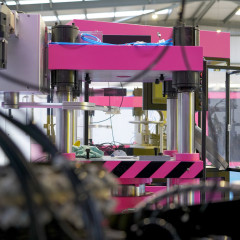