The mass march will be attended by school pupils of all ages, and its route passes the COP26 event.

Thousands of people will be walking from Kelvingrove Park to the Glasgow city centre today in protest against climate change. The protest was organised by Fridays for Future Scotland, a group that was founded entirely by young people, in response to Greta Thunberg’s activism. Thunberg herself has also joined the march, and urged striking council workers to join with her.

Fridays for Future sees young people around the world striking from school on Fridays to help raise climate change awareness. This time around, people of all ages will march, not just those who were in school, calling for immediate action from world leaders attending the COP26 climate summit. Thunberg has been expected to speak at the event, alongside Ugandan activist Vanessa Nakate and more youth activists and trade unionists from around the world.

An activist from Future for Fridays Glasgow named Anna Brown has stated that the protest would help to demonstrate a need to discuss climate change away from enclosed spaces. She said, "The message is that the system of COPs - we've had 26 now - that system isn't working. So we need to uproot that system. The message is you need to listen to the people in the streets, the young people, the workers." She continued, "We need to move it from being in an enclosed space where people can't get involved to the streets, where people can see what's happening and have a say.

First Minister of Scotland Nicola Sturgeon has said that she is committed to “meaningful engagement” between the Scottish government and youth groups, and wants to involve them in decision making. Sturgeon will be joined by COP26 President Alok Sharma and the UN’s chief climate negotiator Patricia Espinosa later today to read a statement written by young people, setting out the actions they want world leaders to implement when tackling the crisis.

Sturgeon said: "In Scotland, we are already acting to tackle the climate emergency, but, as we have heard from children and young people this week from Scotland and round the globe, is it not enough and we must do more."

The police presence at the protests intends to be limited, according to Chief Constable Gary Ritchie, as they do not expect to see “major disorder” from the youth march. He said: "It will be a different approach to some of the policing in the days leading up to this. We respond to the threat and risks that are posed and the info given to us. Clearly it is a different picture today - it is children who are keen to have their voices heard and make their point so that world leaders hear them and we are keen that they can do that.”

Even Prince Charles was invited to take part in the march, but has said that taking part would prove “difficult”, stating: "There's a big march tomorrow, which some people have said I should join - that's more difficult - but the point is, please don't forget these people out there. Don't forget that it's their future."

Header Image Credit: "Greta Thunberg" by Streetsblog Denver is licensed under CC BY 2.0 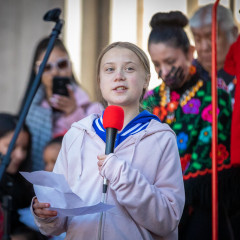 The mass march will be attended by school pupils of all ages, and its route passes the COP26 event.