*All these are my views and opinions if anyone feels offended please leave a comment below.*

Having moved to the UK in 2002, I view my first home as Birmingham, where I grew up and had a life. Not knowing what I would grow up to enjoy, I managed to find a passion in film-making and made a living from it.

Between the years of 2010 and 2013 Birmingham was thriving in the arts and I was really getting into it. The art scene in Brum grew and became a community full of artists and creatives and small companies doing little things. Within the last 3 years I've seen the peak and fall of that scene, with a lack of funding from the Arts Council and fewer activities being produced, nevertheless things were happening.

As I grew up my perspective of the creative scene changed. Certain things became more transparent, my knowledge of the structures and ethics of putting a project together, and putting up funding bids, became more apparent and the idea of having certain requirements for the sake of ticking boxes was frustrating. As a filmmaker, I couldn't really rely on arts funding to make my films without it focusing on an issue, and making sure that a group of deprived young people from a poor background were learning something out of the project, and then I have to have something to show at the end. For some, it's easy, but for those creatives who are chasing our dreams it's a long and arduous process.

Progression is only one element which is affected by the mentality of needing to progress. what i mean is the mentality within the Birmingham creative scene is very different to other cities. we seek moments to mould our own opportunities but are cursed with the need of elevation. The energy is much more vibrant and free. Compared to Londoners, Brummies' are more relaxed and open minded – no offence to any Londoners – the city has different creative hubs where things happen throughout the year. Places like the Mac, the Custard Factory and the Library are some of the main ones. Although creatives alternate between different places, there has been a division. Certain places don't feel as social as they used to, and certain groups have a sort of "clique" vibe which isn't comfortable. all this adds to the tension that's building - not built because it's still happening - creatives seek answers to a path that may lead them to a compass which will guide them through a fog of uncertain futures.

I guess over time you grow up, and what's meant to be a fun thing becomes an enterprise of some sort, and all of a sudden you find yourself wearing suits and going to meetings to cause death by Powerpoint presentations.

Having been inside offices at museums and galleries, I've realised the truth - they're just the same as any normal business office! Desk, computer, coffee, paperwork, telephones, checking in at work, using your politically correct filter to not offend anyone, calendars, meetings in the afternoon. I guess the reason why I say this is because there is no difference and that's a sad truth.

So what's the solution?

If I had a pound for every time I get to that question, I'd have the solution. In reality, praying and getting lucky is the best way to cope. Networking and talking to the right person is the best way to land a deal. But, to really make a change, the answer comes from within ourselves - #cliché!

So you may be thinking what the hell am I on about? For people outside of Birmingham you can try this within your own cities. For brummies' reading, this is really important – the key is to generate our own income. The best thing we can do as artist and creatives is pay for each other's services instead of expecting freebies and 'mates rates'. If we're able to keep money flowing among the creative scene, we'll be able to earn and sustain our work as well as grow as a community.

In a conversation with a fellow film maker, discussing a low budget feature film coming out soon, I realised the best way to grow a film industry is to create more feature length content. If we mass produce films in the city, the public may be willing to go see homegrown films, and we would capitalise on the market to generate income for our film industry. The same logic applies to all art forms. If we invest in a theatre show or music performance, we'll be able to generate our own money and gain a reputation for creating great content.

But again dreams are only dreams. Eventually the problems will be solved and Birmingham will become great again. But in a sector that relies on the people within it, and the interest of the public, it's important to stand together and be proactive. 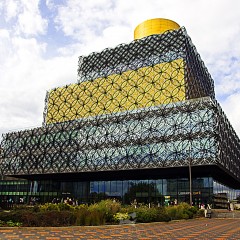 To pimp a Birmingham: curse of the second city