We take a look at the legacy of the trailblazer, visionary and legend that is Jamal Edwards (1990-2022).

The UK’s hip-hop, rap and drill scene is undisputedly bigger and (arguably) better than it has ever been. All you have to do is take a look at the charts, and you’ll see many of these tracks heil from these genres. It is safe to say that the scene has come a long way from when the police used to shut down shows.

Rome was not built in a day, though, and if there was ever one person to anoint emperor, it would be Jamal Edwards (MBE).

Edwards is responsible for some of the marquee names in our country’s scene, directly and indirectly. Ed Sheeran, Skepta, Dave, J Hus and Nines are just five of the countless legends who appeared on SBTV, a platform dedicated to helping "discover and break emerging artists".

On 20 February 2022, Edwards tragically passed away as a result of "sudden illness" at the age of 31. Edwards attended The Brit Awards earlier this month and had reportedly performed at a gig as a DJ, many of the artists who collected awards would undoubtedly attribute their success to Edwards and SBTV.

Time caught notice and featured him in a segment for the magazine entitled, ‘Next Generation Leaders. Edwards’ story is inspiring not because of all its glitz and glamour but simply because it is, well - real. Jamal expressed his frustration of his peers not being able to catch a break and have a music platform; "I was like, 'I've got a camera for Christmas, I'm going to start filming people and uploading it'."

Edwards’ story would even form the basis for one of my favourite advertisements for Google Chrome.

In 2014, Edwards was recognised for his services to the music industry and was awarded with an MBE. Yet, he was not content to stop there and served as an ambassador for Prince Charles’ ‘Princes Trust’ - championing mental health awareness, funding youth centres and encouraging other entrepreneurs.

Politically, SBTV stood defiant when police were shutting down shows with the controversial measure of 'Risk-Assessment Form 696'. Indeed, without platforms like this, the music scene today would not exist. Edwards, in many ways, facilitated the ‘boom’ of grime music that paved the way for the scene today.

To say that our nation’s music scene would be different without him would be a massive understatement. Edwards is responsible for giving a platform to artists who at some point had soundtracked your life, whether you realise it or not.

To say he was a trailblazer, visionary or even a legend does not do justice to the legacy of Edwards, RIP. 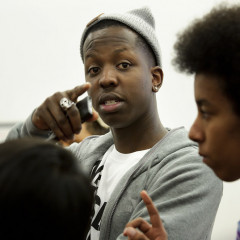 We take a look at the legacy of the trailblazer, visionary and legend that is Jamal Edwards (1990-2022).