Anna Wintour once said, “fashion is a reflection of the times”.

So, it makes sense that fashion naturally borrows from an eclectic mix of races, cultures and creeds. However, what doesn’t make sense is that it tends to exclude the very same groups it claims to represent.

The problem with defining ‘fashion’ is it is subjective, and the answer largely depends on who you ask. Ask a designer, commentator and a consumer, and you will no doubt receive three different answers. Anna Wintour of Vogue, however, once made the astute observation, “fashion is a reflection of the times”. This has become something of a truism in the fashion community and is often seen on the runways of New York, London, Milan and Paris twice a year.

To reflect the times, it’s only natural that fashion draws inspiration from various cultures, races and creeds. Something that’s become evident is fashion operates only under the guise of being inclusionary. The industry masquerades as inclusionary when it befits them to produce their latest collections, embedding themselves and taking from pockets of society to produce their latest collections. Yet, they often prove to be exclusionary when the time comes to compensate the very people they owe.

This is by no means a new revelation but rather one that has been reinvigorated following The Met Gala, where Emma Chamberlain hosted the prestigious event wearing a necklace stolen from royalty in India. A stark contrast to the tribute paid to the immigrants who had propped up the gilded age by Riz Ahmed. Gabrielle Union paid tribute to enslaved African-Аmericans with her Met Gala out but came under some criticism for doing so whilst wearing Tiffany Diamonds. Although in recent years, Tiffany may have cleaned up their image, some still have long memories about what the jewellery brand was built on. Granted, Chamberlain may be given the benefit of the doubt as perhaps she did not know the history of the piece. But the fact of the matter is that these issues still remain.

Outside the Met Gala, there’s many examples of the fashion industry operating in an exclusionary way. The industry frequently references wider culture in order to source inspiration for their latest collections, yet do not repay the favour by giving back to the very same communities that they are profiteering from.

Timberland has become synonymous with hard-wearing, premium quality and stylish workwear boots. ‘Timbs’ were designed with construction in mind but later embraced by an entirely different demographic – the hip-hop community.

However, in an interview with The New York Times, Jefferey Schwartz remarked, “If you hear hip-hop kids are wearing Timberland boots … that’s coin in current dollars, Mr. Swartz said. But how in the world is that sustainable?”.

Timberland certainly had seemed to embrace the hip-hop community with various initiatives including ‘Give Racism The Boot’ and ‘The Boroughs Project’, but the comments seemed to belie any good faith. Swartz for his part insisted in the same interview there isn’t “... any plan to dissociate his company’s name from young, Black and Hispanic consumers …”.

Timberland ultimately seemed to exclude a demographic who contributed massively to their bottom line. Timberland was quick to accept Black money but not so quick to embrace Black people and their culture.

In a similar vein, Ralph Lauren’s Polo brand exhibited exclusionary behaviour towards minority groups. Timberland’s lustre was largely due to their boots being hard-wearing, premium quality and stylish, but what would make the hip-hop community become enamoured with a brand like Ralph Lauren’s Polo?

Michaela Angela Davis (Writer, Activist and Former Fashion Director at Vibe Magazine) explains that “Polo was a great sort of metaphor for the American Dream, like, whose dream is this, right? This is what the American Dream wears.”

The aspirational quality of the brand is what made it alluring in the peak of the ‘crack era’ of New York, where individuals were making more money than ever through various illicit activities like drug dealing. They “... had to floss, they had to look really really fly, and what better way than aspirational sportswear from a brand that’s getting insane amounts of attention?”, asks Brian Procell of Procell Vintage Clothing.

This is important because it explains the birth of an infamous group of collectors known as the 'Lo-Life's', so-called after one of the group’s founders was stealing garments and was literally called a ‘low-life’. Lo-Life’s ‘boosted’ [stole] clothing, and this, in a way, became a form of guerilla product testing for Polo. The brand took note of what was being stolen by members of the collective and what they chose to leave, using this to inform what they should produce more of and less of in future collections. Polo and Lo-Life’s had a symbiotic relationship in that the former saved cash and the latter acquired clothes.

Polo simultaneously distanced themselves, condemned and ultimately excluded those such as the Lo-Life’s, despite financially benefiting from them both in a sales and market research sense. Retroactively, Polo decided to reissue their incredibly popular '92 Stadium and Snow Beach collections – a move which can be interpreted as again benefitting from the same community given they were the primary consumers of these collections at the time.

Polo may have publicly condemned, but they privately benefitted from the actions of the hip-hop community.

Gucci is a brand which is no stranger to controversy and has come under justified fire from both the Black and Sikh communities. So it is little surprise they demonstrate exclusionary behaviour, notably to Daniel Day or ‘Dapper Dan’.

Dapper Dan from Harlem would reappropriate materials from luxury fashion houses for his own designs, which would quickly acquire a cult following amongst his far-reaching rapper, athlete, and hustler clientele who were in the know.

Unfortunately, the luxury fashion houses didn’t care for this and would frequently object to his creations. Not only would they send persistent cease and desist letters to his twenty-four-hour atelier in Harlem, but Fendi, in 1992, led a raid which would shut him down.

Yet, Gucci’s 'Cruise' Collection (2018) featured a piece remarkably similar to one made by Dapper Dan. Gucci found themselves doing the same thing they pursued litigation over many years beforehand, benefiting from the hard work of a man they once excluded.

Evidently, history suggests fashion, whether haute couture or streetwear, has proved to be exclusionary. In our increasingly culturally, socially and politically aware world, one would think this happens less often, but is this the case?

Polo had something of a turning point where they seemed to embrace those that they once excluded. The watershed moment was when they recruited a model outside their typical mould – Tyson Beckford. Kanye West then grabbed the baton and ran with it during his affectionately fan-dubbed, ‘Pink Polo Era’. Whether this was a stroke of marketing genius or something forced upon them is a point of contention. Davis makes her stance clear, asserting that “they didn’t know how to sell luxury goods to Black people.” Solace of Timeless Truth corroborates Davis’, explaining, “Polo never catered to the hip-hop community … Ralph just always did Ralph, we made it hip-hop.”

Alessandro Michele at Gucci faced a justified level of pressure from the public after the aforementioned Gucci ‘Cruise’ Show in 2018 and extended a long-overdue invitation to collaborate with Dapper Dan. Gucci-Dapper Dan was born and turned what was once a creative clash into an official collaboration. This was significant for a number of reasons, most notably that Dapper Dan’s work was finally vindicated and recognised by the same brand that once tried to stop him and at one point seemed to have done so. Dapper Dan seemed to have achieved the objective he set out to achieve so many years before, an “Africanization of the premium European clothing brand”, and offered his own seat at the table of Gucci. As the man himself puts it, “I went from refashioning fashion to having fashion refashioning me”.

However, the most high-profile instance of this was the late Virgil Abloh’s appointment to Louis Vuitton. Abloh made history when he became the first Black head of the brand’s menswear department in its 150-year history, which no doubt inspired a whole new generation of Black creatives. Abloh brought streetwear to high fashion, which is significant as it draws from African-Americans; Been Trill, Pyrex Vision and Off-White are just three of the brands he was involved in before landing at Louis Vuitton.

This does not make up for the years of exclusion, appropriation and profiteering at the expense of minorities. However, there appears to be a slow yet steady changing of the tide in contemporary fashion now, where culture, race and creed are not things to be hidden away but now form an integral part of brands.

The tide seems to be turning, and this is being driven by brands such as Paria Farzaneh and Mowalola, designers who draw inspiration from their backgrounds and make this the crown jewel of their label – culture, race, and creed are no longer shied away from. 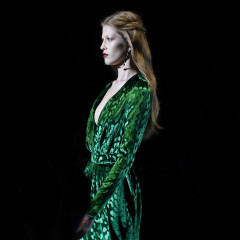 'You Can't Sit With Us' - Clothes, Culture & Race In Fashion