The history of protest is incomplete without looking at what people wore. It is how people express what cannot be said, or how they reclaim their identity. Here are a few examples of how fashion has furthered protest throughout history.

The way we visualise history is through fashion. For example, when we think of the 1960s, it's all miniskirts and psychedelic patterns. Imagining the 18th century is hard to do without the picture of men and women in wigs the size of badgers popping up in your head. Fashion has been a means of expressing your identity for centuries, but it is also important in fighting against oppression. Protest and fashion are intertwined, whether this is intentional or not. Here I look through some iconic periods of Western history and how clothes can be a powerful tool in furthering protest.

In Britain at the beginning of the 20th century, Suffragette marches were planned to the tiniest detail, including what to wear. For the most important occasions, they all wore white, to give the image of an advancing army. There is something powerful in this association, fostering a sense of comradeship and belonging within these women. It shows how important fashion was to their cause and furthering their message for women’s rights.

Branding was also present in Suffragette fashion. Their all too familiar colour scheme of purple, white and green, whilst having symbolic value, also had practical advantages. The colour combination could be used overtly on banners, or as subtly as the socks these women wore – confirming their support for the movement. Women’s Press Headquarters sold scarves and bags, and prominent London department stores such as Selfridges sold accessories and soaps in Suffragette colours. Having their colours available to be purchased increased their visibility and subsequently furthered the presence of the issue of women’s rights. Through fashion consumerism, you could express your allegiance to the movement – a powerful tool in gathering support and legitimising their cause.

The Black Panther Party was formed in the USA in 1966 and was a movement that protected African Americans from police brutality and protested their exploitation from white Americans. Part of their resistance was expressed through them fostering their own identity. Expressing their link to Africa through clothing was an important aspect of distancing themselves from the Western world, and bolstering their protest. For example, the use of Kente cloth, a handwoven textile, emphasised the history of Ghana and its people, such as the Ashanti’s. Here they are preserving an African identity that Europeans had tried to destroy, not allowing it to be forgotten.

They also established their own police uniform. A black beret, turtleneck and leathers gave them a unified look, sending a strong message that they were willing to take action. An army ready and waiting. It was a strong statement that has endured, as it is the first image that comes to mind when considering the movement today. Through their memorable fashion, you attach their message, showing how fashion and protest can be interlinked.

The free-spirited hippies of late 1960s America would be very unhappy about an article on fashion. For them, fashion was yet another example of the shackles society ties us down with, restricting individual freedom and turning us into mindless consumers. Their fashion was a clear protest of their parents’ generation and everything they stood for – a blind allegiance to consumerism and an obsession with social position.

This was all thrown out of the window by the counterculture movement, in favour of individuality. The pretty pastels and floral patterns their mothers may have worn (think Betty Draper in Mad Men) were abandoned in favour of psychedelic prints and patterns inspired by other cultures. Clothing was loose and flowing, symbolic of them freeing themselves from the constraints of a society they deplored.

Furthermore, there was a growing awareness of environmental problems, meaning clothing had to be ecologically friendly. They favoured natural, or pre-used materials, for example turning tablecloths into clothing.

Revolutionary changes in fashion often occurred after a conflict, perhaps a response to the hardships and austerity of war.

After World War One came the Flapper Age. Dresses became straight, loose and sleeveless, the waistline dropping below the hip and women’s breasts were taped up. This was an effort to create a youthful, boyish look through the vertical silhouette. An additional element of daring was added, especially to evening dresses, which were made of translucent fabrics with little decoration creating an illusion of nudity. There was a need to break out and have fun reflected in the fashion of the time, alongside a growing sense of female sexuality and empowerment. Fashion not only protests the period of war by favouring youth and fun but also challenges the idea of how women should behave.

The freedom of dress represents freedom of movement, of expression. It contrasts greatly to the Belle Epoque period before, of tightly corseted women and romantic gowns adorned with lace. No longer roses to be admired, females are in control of their own lives because their clothing allows them to be free, fashion now rejecting their previous ideal.

Sometimes protest can arise from what people’s clothes symbolise. Consider the two most famous revolutions in history. There were a multitude of factors for the French and Russian revolutions, but a common one was the rejection of the decadence of their monarchies and nobles. Crucially, it was what these rulers wore in their respective centuries, and how it exposed corrupt and unequal societies. Whilst nobles threw away money on clothes, ordinary people were starving to death.

Marie Antoinette, the infamous victim of revolutionaries in France, spent a vast amount of money on clothes, apparently never wearing the same outfit twice. Meanwhile, the French treasury was depleted and people protested against taxes and shortages. It is not to say Antoinette alone was responsible for this protest, but her clear extravagance whilst others went without contributed to regicidal sentiment towards the monarchy.

Similarly, the Tsar and Tsarina of Russia hosted the Winter Palace Ball in 1903, and what people wore to this ball was almost comical in its extravagance. The two rulers were draped in Faberge jewels, with some outfits estimated to cost over ten million dollars each! A carnivalesque picture of the event depicts all of the guests gathered together – seemingly waiting to see the winner of the biggest be-jewelled headdress of the year. In that same winter, their subjects were freezing and starving to death.

Again this ball was not the only reason for revolution, yet the excess of luxurious fashion is symbolic of why people protested these systems. It exposed the careless privilege the elite possessed, gladly blinded by their own jewels so they were unable to perceive the suffering of others.

Today fashion is still integral to protest. Whether it is the conscious decision to dress in black for the Golden Globes to combat sexual assault in Hollywood, or shopping sustainably to help the environment, what we wear is relevant. It has been in the past and will continue to be used in the future, intentionally or not. 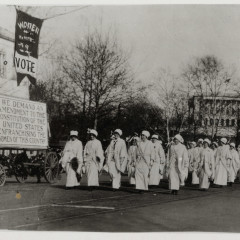 The history of protest is incomplete without looking at what people wore. It is how people express what cannot be said, or how they reclaim their identity. Here are a few examples of how fashion has furthered protest throughout history.