Voice MagBlogsF1 and its problem w…

The Austrian Grand Prix is usually one of the most exciting weekends in F1. Taking place at the Red Bull Ring amongst the rolling Spielberg hills, it's a bucket list track for F1 fans to visit. However, this year the event was overshadowed by the multiple accounts of abuse fans had received. Recipients of homophobic, racist and sexist abuse bravely shared their experiences on social media, this harrassment being called out by drivers and teams within F1.

Instances included catcalling and inappropriate touching of female fans. One fan had her dress lifted up by a group of drunk male fans who said “You’re a Hamilton fan, you don’t deserve respect.” Most reports referenced the stands where Dutch Max Verstappen fans were gathered. Of course, not all Verstappen fans were behaving in this manner, however, they were the group predominantly out of control. Not only were they harassing other fans but also personnel within Formula 1. A fan whilst publicly urinating, hurled abuse at a member of the Mercedes Team, and a video circulating on social media showed a group of Verstappen fans burning a Lewis Hamilton cap.

The response from the paddock was widespread condemnation of those harassing others. As Toto Wolff eloquently put it, abusive fans can “fuck off!” The message couldn’t be clearer that such behaviour was not going to be tolerated, with harassed fans being brought into garages and given paddock passes. Even F1, who have always been a bit slow when it comes to addressing social issues such as these, have acted quickly since the events in Austria.

Speaking to Hazel Southwell, motorsport journalist for The Drive and RaceFans.Net, they explain the security F1 put in place for the following French Grand Prix at Paul Ricard. Concerning the changes they said: “I think it is huge progress that from Austria to Paul Ricard they’ve already put in place additional security that is easily pointed to and marked. If you are facing any problems you can go into that security and they are empowered to remove people.”

However, F1 is late in solving this issue and you cannot help wondering why these measures were not in place anyway? Fan abuse is not a new thing at Grand Prix’s, nor is it at most events outside of motorsport – with a recent increase in accounts of sexual assault at gigs. Other women have recalled catcalling at past Grand Prix’s, some recounting it all the way back to the 1980s. During the 2008 Spanish Grand Prix some fans appeared in black face, part of the racist abuse Lewis Hamilton has faced throughout his career.

Yet, the events at the Austrian GP are so alarming because of the sheer volume of cases of harassment, and disorder on this level feels very unique to Spielberg, nearing levels of football hooliganism. Hazel considers the reasons for this:

They describe that “there has always been some harassment” but “it's not the case at every track and it's not the case with every crowd. But certainly I’ve seen it happen at Silverstone and Spa and generally speaking it is a European problem.”

Hazel also discusses the logistical reasons why you are more likely to see this kind of behaviour at the Austrian GP for example, a permanent circuit in the middle of nowhere rather than the Singapore Grand Prix, a street circuit in a city.

“You might be able to get away with that kind of thing happening at Spielberg, you are not going to get away with it happening at a street circuit and keep your licence for that event. Formula 1 does have to run a reasonable event that a city can justify having which obviously if it turns into some kind of horrible abusive situation you will find you cannot get the licence for the event.”

“So it is quite unfortunate that some of the factors that are moving this forward right now are not purely that it should be addressed.”

Furthermore, the sport has never been more popular than it is now, due to the TV show Drive to Survive bringing new audiences in on Netflix. Most races this year have seen record numbers in the crowds, all creating an electric atmosphere, which explains why F1 are under more pressure to deal with these issues. They recently released a joint statement across F1 labelled ‘Drive it Out’. In a poorly scripted video drivers condemned this abuse, and F1 essentially told people how to report online abuse on Twitter.

Despite extra security and F1’s rather woolly ‘Drive it Out’ message, repeated incidents of fan harassment were reported at the Hungarian Grand Prix last weekend. Once again Verstappen fans were seen burning Mercedes caps, and security have been on some kind of power trip punching fans and an official photographer. If the very people you are meant to trust are part of this harassment, Formula 1 has barely begun to solve these issues.

F1’s demographic has also shifted significantly in the past few years, changing its audience. This is evident if you are active on F1 Twitter, with more women tweeting, talking and working in motorsport than it feels ever before. Put simply, more women are attending Grand Prix’s, although audiences are still largely male. Which is why we are hearing about an increase in harassment at races. An investigation by UN Women reports 97% of women aged 18-24 have been sexually harassed, meaning unfortunately being sexually harassed is a consistent part of a woman’s life. Therefore, as more young women attend Grand Prix’s, the level of sexual harassment is unfortunetly likely to increase.

My own experience at the Hungarian Grand Prix was that me and my friend were the only two women in a sea of men. We were lucky in the sense that we were not on the receiving end of any abuse, but if we were I would have felt powerless to report it as help to do so was not clearly signposted, and with security as the main perpetrators of brutality themselves they would have been too intimidating to approach. Additionally, it would be difficult to retreat to a safe space because everywhere you looked it was predominantly big groups of men.

Experiencing racial harassment would be difficult as well, considering a majority of the audience and security were white. If F1 is going to try and clamp down on harassment, they have to be realistic about who is attending Grand Prix weekends. Whilst there are more women, white men still tend to dominate and they need to bear this in mind in their strategy to improve fan safety. One improvement I could think of is having more representation within security to make different groups feel more at ease in who they can contact.

Hazel summarises this problem perfectly stating F1 has “been a sport that went out and deliberately got new people to come to circuits but at the same time as welcoming new people it has not thought through all of the implications. Which is that race tracks have not always been particularly respectful places.”

It feels that although F1 has started to welcome diverse groups in terms of generating ticket sales, they did not think through the realistic possibility of people being harassed. This shows a fundamental lack of diversity within the organisation. Basically anyone who is not a white man is sadly accustomed to discrimiantion from a young age. Their presence in F1 and the FIA is fundamental to a cultural shift that will help tackle harassment at circuits. Men may not think about putting policies in place that help tackle harassment because they don’t experience it on a regular basis, potentially making it less of a priority. By having more diversity internally within F1 priorities in tackling abuse may shift.

According to Hazel “It's very important that women have to be considered as voices of authority within the FIA, and within Formula 1 there are more women in positions of power making sure the balance of power falls in a way that is much more evenly distributed and where the significant equalities are more addressed.”

F1 and the FIA on the surface seem to be on the way to doing this. Hazel continues, “Something that is very positive is that the new FIA president Ben Sulaymen is trying extremely hard to diversify and make sure the right people are getting into positions of power.”

F1 clearly has a long way to go before abuse is properly tackled. On the one hand, their instant response and solutions has been positive and shows they are finally considering the diversity of their sport. Yet, F1’s internal culture has to shift with the growing fan base to become more inclusive. No one should feel unsafe watching the sport they love, but unfortunately this has been the case for many. What F1 needs to do is look into the reasons for increased abuse. Releasing statements does not translate into action. Ensuring there are material consequences for those who abuse others at Grand Prix’s such as lifetime bans is stronger than any carefully santised message F1 wants to put out on their social media. 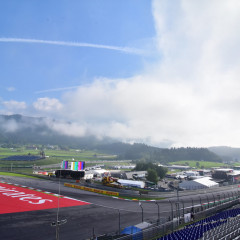 F1 and its problem with harassment: why is it happening and how can it be prevented?