We spoke to Stephan R Cole member of the International Brotherhood of Electrical Workers about his experiences within a union.

The International Brotherhood of Electrical Workers are a union from the US, who represent workers across the electrical industry in North America. We spoke with Rosendin Workplace Development Coordinator, Stephan R Cole about his experiences within the IBEW to gain an insight into how unions are perceived across the pond. There are some differences between US and UK union structures. For example,  the IBEW represents workers not only in the USA but in Canada, Puerto Rico, Guam and Panama giving it a broader reach. Unions in the UK, however, would not represent French workers for instance. Stephan also conveys the importance of the collective within union, labelling strength in numbers as one of the fundamental necessities to enact change.

With little knowledge of how American unions operate, speaking to Stephan has given me more of an understanding of their workings. Despite differences with the UK, it feels as if the IBEW has a similar ethos to our unions and one important similarity: the need for more people to join.

You work for Rosendin which labels itself as an employee-owned company. What is meant by that?

Employee ownership means no single person, family, or third party is a majority shareholder of company stock. The company’s stock is allocated among the employees through shares. Employees at all levels of the company have the same ownership opportunities. Rosendin is owned by the employees that work for the company and are not part of the IBEW collective bargaining agreement that our union electricians are under.

Could you explain to me how unions operate in the USA?

The primary purpose of unions is to negotiate on behalf of the workers with the contractors and owners for wages, benefits, and working conditions.

What prompted you to join your union the IBEW?

I joined the union when I learned that the apprenticeship included paid on-the-job training, and the wage and benefit package had structured increases as I advanced in the program.

The name is interesting, especially the word Brotherhood. How does your industry include female workers?

The International Brotherhood of Electrical Workers was established in 1891. Brotherhood means there is a higher bond between members like a family. We stick together to bring a higher standard of living to everyone in the electrical industry and beyond.

Women are very welcome in the IBEW and, in fact, are highly recruited for the apprenticeship programs and the union organisation. While the IBEW has "Brotherhood" in its name, women are referred to as sisters. One benefit of the union is that wage disparity for women and minorities is zero percent, as individuals with the same title are paid equally. Equal work, equal pay.

Throughout your membership have you found the union has always aided you when you’ve needed protection as a worker?

Yes. If there was an issue with my wages, benefits, or working conditions, the Union would investigate and get things in order for me relatively quickly.

Has there been a strong history of strike action in the IBEW?

In the IBEW, we have a no-strike clause and a dispute process in place when contracts are not being honoured. Doing this helps maintain working conditions while issues are worked out.

Have you found a community has formed between you and other workers because of your union?

Throughout my years as a union worker, I have developed close friendships with other union and non-union workers. I believe that union employers provide the most opportunity and best work environments, so I want to be a part of a community that feels the same. People have a choice in what they need in a community, which may or may not be with a union. It has worked well for me and my needs.

IBEW not only protects workers in the USA but also Canada, Puerto Rico, Guam and Panama. Does the union equally support people in these different regions or do some areas receive more support than others?

I can’t speak to areas outside of the U.S. because I have not experienced working in those areas. I can say that the IBEW has a strong constitution and international representation, which leads me to believe the IBEW would provide the same support in those areas.

Do you think unions need more power to enact change, for example in relation to sectoral bargaining?

In my opinion, unions need more people to join. The power of the union comes in representing the people and that’s when you will see more change in improving working conditions, wages, and benefits.

Finally, what are your thoughts on strikes happening in the UK at the moment, including rail workers and barristers?

If the workers in the UK feel that a strike is necessary for the change they are looking for, then I would support their decision. Nobody wants to strike because a strike brings lost wages, benefits, and potentially a career. 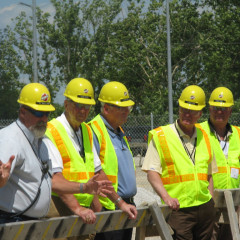 We spoke to Stephan R Cole member of the International Brotherhood of Electrical Workers about his experiences within a union.