A curator, searching through the archives of her museum, uncovers over 50 hidden (and surprisingly raunchy) letters addressed to a friend of her predecessor. Embarking upon a journey through the story told by the collection, she pieces together the lives of Minnie and Alex, the former a talented seamstress living in Glenesk, the latter, a prospector who emigrated from the Glen to join the gold rush at Canada’s Yukon River.

In the background of the stage, musical accompaniment is provided by Georgina Macdonell Finlayson. This element of multimedia storytelling is thoroughly engrossing, oftentimes defining the tone of the show. The dancing that occasionally accompanied the music felt a little jarring in the flow of the narrative, although there were no faults with the choreography itself.

The moments of high emotion from the curator also felt rather unnatural, although this may have been less to do with MacDonell’s performance and more to do with the letters that inspired the outbursts. The show is somewhat restricted by their content; the letters are charming and historically interesting, and certainly frustrating at times, but at no point do they feel like they could have inspired the curator’s fervour.

That is not to say the letters did not have an impact on the audience. They are fascinating, and were read aloud excellently by Alan Finlayson, whose Doric accent lends the written paragraphs a proud sense of authenticity. There is something special about hearing the innermost thoughts, concerns, hopes and dreams from someone long since passed away. It connects the audience to history, reminding them that people from the past were as human as they are today.

There is a clear passion for people’s history shining through this entire production. Glenesk Museum, where the letters are archived, has long been an important cultural hub for Highland history.

A positive experience, and one filled to the brim with historical content that truly engages its audience, Miss Lindsay’s Secret is a treat for those with prior interest in cultural storytelling.

Tickets to the remaining performances are available here. 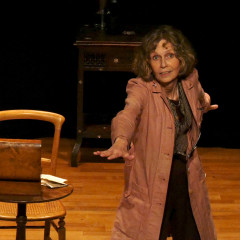