Jena starts off very strong, digging in to cultural quirks with great comedic execution. She works through a set about politics, Brexit, family, friends, Nazis, and technology, and in the first half of the show almost every other line is getting a laugh.

The delivery as a speaker is excellent; pausing for things to set in, bringing a great energy to the stage, and even employing amongst the more story-based jokes some funny puns and one-liners; almost as if they’re off-the-cuff. These are great attributes of this witty and dark-humoured comedian.

She has many good things to say about the state of world politics, the idea that ‘we have to get offline and talk’. However, perhaps as she settles in, she becomes slightly more adventurous and tries out material that just doesn’t land. Friedman comments ‘that’s not staying in’ more than once and at least there’s an acknowledgement. There's also lines where she looks at audience members and says ‘you’re right not to laugh at that’.

The set becomes more and more of a political soapbox and centres more so on the issues faced by woman in the media and those suffering at the hands of powerful men, highlighting the me-too movement. But, despite making exceptionally valid points, the delivery did not garner widespread agreement. She also entwines some personal experiences in to the set, but these nuggets of human connection are at odds with the deeply political wit.

This may be down to her focus on American culture and politics. There are a few Americans in who sometimes chuckle but the references may be too niche or specific, which detracts from her opening anecdotes that made more of the comparisons between American and European approaches; allowing a relatability and hilarity in the chaos she highlights. The pace is also lost as she more frequently stops, walks over to a stool, opens a bottle of water, drinks, replaces the lid, and comes back. It’s utter silence in these moments - most comedians cover these well (everyone has to drink when hot and talking for an hour) - but it seems to just be an awkward pause that got more frequent and disturbed the set.

This is a show with lots of promise. It makes some incredibly good and valid points amongst the jokes, and is probably a hit with those well studied in American culture. Friedman is a strong comedian in delivery and wit, the writing arc just needs some work. Go along if you’re interested and it will certainly challenge you to get thinking.

The show is running at Assembly George Square Studios at 9.20pm everyday: https://tickets.edfringe.com/whats-on/jena-friedman-miscarriage-of-justice 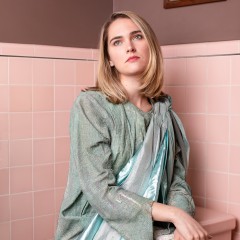