Following a successful Edinburgh Fringe run, Grace Chapman (of Novae Theatre) has rocked up to VAULT Festival 2019 in her jogging shorts, fanny pack and a top she picked up from a bargain bucket at the charity shop – to run a marathon.

Tasking herself with a challenge for her thirtieth birthday, Maddy (Grace Chapman) decides to do something she would NEVER do. No, not the weekly shop, or keeping up an actual job... but running a marathon. Yes, actor and writer Chapman, does actually run through the whole show.

Turning thirty is the milestone we famously dread and Maddy is no exception. It's a time of pondering everything she's ever known. Is she an adult now? Is she meant to be as so far behind as she currently is? Does she need to start knitting and becoming a crossword champion? I quite like the metaphor of a marathon. It makes us think: is Maddy running towards things or infact running away from them? Her boyfriend Pete is waiting for her at the finishing line with that glittery sign and an impending question. The time spent running those 26.2 miles gives Maddy enough time to play 'The Fertility Flowchart' game, a great scene enthusiastically tied together by director Ellie Simpson. Think 'Snakes and Ladders' mixed with the biological clock and you're pretty much there.

Likewise, this play it bucks the trend of millennial angst that we're seeing a lot of on stage recently. Similarly, Chapman's play makes us believe that life isn't a sprint and is indeed a more long-winded marathon. Chapman's protagonist, although she will confidently dispute it, is completely unprepared for both the marathon and her life ahead. She wanted a bit more practice and time to warm up, but sadly that isn't always an option in life.

Sound designer Chris Bartholomew has captured the essence of a marathon perfectly, its enthusiastic start, to its more tiresome middle to its triumphant ending. The endless patter of steps in the background helped to highlight how alone Maddy is, as she forces herself to keep those legs moving. She can't hear her surroundings and instead listens to her own critical thoughts spiral around her head.

I felt the lighting didn't match up as well to what was happening on stage and did sometimes feel a bit too 'stagey', with no effect really in mind with the colours used. Why is the stage red when it doesn't fit a marathon?

The acting felt at times quite off-beat and inorganic. I wanted the thoughts to switch and change more naturally than I felt they did. Chapman doesn't ground herself too easily and does often stagger herself; leaning her weight unevenly on one side which therefore meant her words were often not coming from a place of centrality. The comedic timing was well done, but not as sharp as other VAULT Festival pieces. It felt a bit safe.

Overall, I did think there was a nice mix of tension, light and indeed shade. At times, it didn't feel as  raw as I felt it was designed to be and I wonder if the performer was holding back. In reference to the ending, it's a bit messy and comes with glitter all over the floor. A bit like life, right? 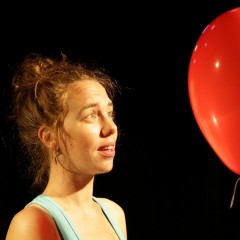 'It's Not a Sprint' at VAULT Festival