Using puppets, A Song of Plague  is a unique piece of theatre that also showcases original songs. The puppets are simple and effective and made for a fun and different theatre experience. The songs were relaxing and understandable, making the storyline easy to follow.

It was clear some research had been done into life in London in 1665, and little details like the red crosses on the doors marking those houses which had caught the plague and the rats which were spreading it, helped to understand the history of the time and the danger the plague posed.

This is potentially a great play for younger people (aged 12 and up), as this time period is a key one in school history lessons. Despite this, there didn’t seem to be anyone younger than myself in the audience. Although the audience clearly enjoyed the show, I think there is definitely space to reach out to a younger market as I felt it was quite an educational show.

The puppeteers are talented and the puppets were very well made, a combination of which made the people and animals alike appear very life-like. The lighting was effective yet simple, and they made the best of the small space they had both in terms of lighting and in operating the puppets.

The venue was incredibly warm, almost to the point of being uncomfortable, which not much could be done about on such a warm day with an almost full house, but unfortunately this did distract my attention a bit from the show due to the discomfort I was feeling. In this way, I found the performance wasn’t gripping enough to hold my attention despite the discomfort we faced due to the weather. I think this is a shame as there is clearly potential for this to be a very good show, but I wasn’t enamoured by it enough to engross myself in it, and didn’t feel I was swept up in the story.

Overall this is a good show, educational and interesting, showing great potential on all sides, and I think I would encourage some young people to go and see it. Just make sure you’re in the queue early otherwise you may struggle to see! 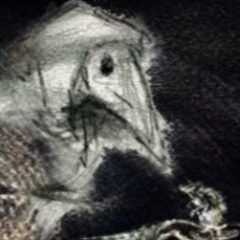 A Song of Plague