Disability access among audiences is becoming increasingly important in UK theatres. Although still far from perfect, there has been a marked increase in number of captioned, relaxed and BSL interpreted performances in theatres, and it’s great what an important part of a show these can become. So it is surprising to me that the same steps are not being taken to ensure access is as easy as possible for actors with disabilities, with a clear contrast between the number of disabled access performances to the quantity of shows that employ actors who are D/deaf, partially sighted, blind or have another disability.

However, there are promising signs that the industry is slowly making changes.

For anyone who reads my monthly theatre round-ups, you will know that D/deaf actors have been the focus of several exciting news articles in the past few months. More and more we are seeing D/deaf actors being given speaking parts and understudy parts, especially, it seems, in Shakespeare plays.

I myself saw a production of As You Like It at the Globe last summer, where the part of Celia was played by D/deaf actor Nadia Nadarajah. Importantly, there were no key changes made to the production, and no emphasis on this particular actor’s disability. The sense of inclusion was complete and totally refreshing and it became clear very early on that most, if not all, of the cast had learnt some sign language in order to include her in other parts of the action. It was so lovely to see the whole cast embrace this, especially playing on such a prestigious stage like the Globe, where the audience are so much a part of the action. I felt completely captivated by the acting, and I never felt like the hearing actors were experiencing anything without including her.

Another much more recent example of D/deaf actors making a wave in the theatre industry is when Deaf actor Charlotte Arrowsmith stepped up to understudy for a hearing role at the Royal Shakespeare Company (RSC). This was not only a first for the RSC, but is believed to be a first in any major theatre. Although there wasn’t much time to prepare, the other cast members integrated signs into their speeches to help include Arrowsmith in the action. This is a prime example of how it is completely possible to have D/deaf actors playing principal roles in shows, knowing they would receive complete support from their fellow cast members and audiences.

Equal opportunities are spoken about a lot, especially when applying for jobs in the theatre industry. Hopefully the examples set by both the RSC and the Globe, among others, will push more theatres across the UK to employ actors and technical staff regardless of whether they have a disability or not.

Situations like the ones I have described don’t come about often, but I’ve seen more articles and examples of D/deaf actors being given opportunities such as these in the last year than I have ever heard about before. This indicates a strong positive step in the direction of inclusivity and equality in theatre. I know it will take a long time to reach the level of equality across theatre as a whole that we are aiming for, but seeing such confident moves in that direction, even if only from the on-stage side, is really positive.

Have you seen a production or a performance where a D/deaf actor was a part of the cast? How did it feel watching the production? 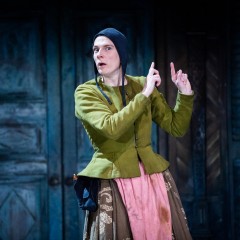 How Deaf Actors Are Making Waves in the Industry