At the beginning of this year, there was a fair amount of press attention towards toilet facilities in theatres, specifically those in the West End. Many of the main news hubs of London, including the BBC and the Independent reported on this issue, drawing on some surprising statistics to support their claims.

West End theatres vary in capacity from 350 seats to 2300 seats. British Sanitary Guidelines state that the average West End Theatre should have a minimum of 36 toilets for female audience members to use. Despite this, research shows that a lot of London’s theatres only have one toilet for every 38 women in the audience, which is more than 40% less than expected. Calculations by The Stage show that women would need a 57 minute interval to all use the toilet facilities, whereas the average interval time is just 20 minutes.

At the time of these investigations in January, the Old Vic, who are currently undergoing major refurbishments, including adding many more toilets, had the least number of toilets per audience member, at just one for every 56 women. Many London theatres, the Old Vic included, struggle to add toilet facilities or make any changes to the layout of the buildings, due to them having a listed status.

As a comparison, if you take a broader look at toilet provisions for both men and women as a whole, there is actually on average one toilet for every 26 audience members. The British Sanitary Guidelines class a toilet as either a cubicle or urinal. Since urinals take up considerably less space than cubicles, men are better provided for than women.

So, what’s the solution? A lot of West End theatres, particularly the Edwardian and Victorian ones, struggle space-wise to fit more toilet facilities into the already minimal front of house space they have. And even if they can make it work architecturally, is it feasible – despite the frequently excessive ticket prices – for them to close their doors for six months to a year in order to get the work done that they so clearly need, to be able to provide more toilet facilities for their audience members?

While a mammoth undertaking, the problem is less insurmountable for larger theatres. For example, Queen’s, which has hosted Les Miserables for many years, was able to move the production to a different location in order to refurbish. Similarly, Theatre Royal Drury Lane, which closed after 42nd Street ended, with plans to redo the whole theatre before Frozen opens there in 2020, was considered an appropriate and profitable situation. In contrast, smaller West End venues, or those that host shows with much shorter runs, may not be able to afford to close up for such a length of time.

Undoubtedly, these theatres would thrive from a refurbishment in general, but having enough toilet facilities is a basic right. If, like the Old Vic, these theatres can put temporary measures in place to ensure the theatre can remain open whilst these works take place, that may be a solution, but considering the lack of space in central London, it may not be as simple as that. A lot of these smaller or lesser known West End venues thrive off local and UK visitors, whilst the bigger shows pull in most of the tourism, so issues such as poor facilities are harder to solve, as the income may not be as consistent.

Ultimately, I can make as many excuses as possible for why these changes haven’t been made, but the bottom line is, having a good quantity of clean, functioning toilets is something you would expect on any outing in the UK, so why should a theatre visit be any different? The lack of queues in the men’s toilets is not just because it’s ‘easier’, but also because they have so many more facilities per number of them than women do. I think in our current world, where equality is improving and the voice of women is slowly being heard more and more, enough female toilets in theatres are a simple thing to ask for. 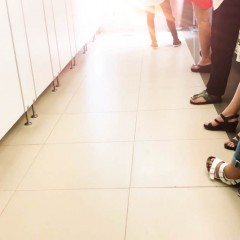 Lack of female toilets in theatres