It took a while to realise, when the room was in darkness and Meehan told us a fuse had blown, that he wasn't joking.

The unluckiest start to any show I've seen. The fuse blew the instant before his name was called in the introduction: "Please welcome to the stage James Meehan". Either just the worst of luck, or too little material.

Meehan, from Voice's Pick of the Edinburgh Fringe award winning sketch group, Gein's Family Giftshop, has gone it alone in his first solo stand up show. Short on any other prejudices, he has elected to make a show about classism. Classism within the arts is something that blights the careers and the chances of Fringe success of many artists and performers just like Meehan and to build a show around it is quite brave and exposes his niche nicely.

He doesn't hold back with addressing the stereotypes of his fellow working class and the self-deprecation had the audience completely on his side. His style is anecdotal; nice and snappy. Not always too effective – it feels a few months short of quite finished – but as much can be expected for his first foray into stand up.

My worry was that he would try to lift some of the relentless night sky darkness from Gein's and put it into Class Act without the comfort of his fellow performers. Luckily, there was a more tactful amount of it – oh, it was still dark – but the right amount. The multimedia element was overplayed but I'm completely willing to overlook that and hope Meehan's work and profile grows quickly.

James Meehan: Class Act is on at 18:20 at The Tron pub until 28 August (exc. 15 August). For tickets and more information, visit the Fringe website. 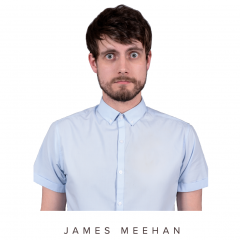 It took a while to realise, when the room was in darkness and Meehan told us a fuse had blown, that he wasn't joking.