A lively and funny show from the great Zoe Lyons.

Zoe brought fun and laughter to a large and all-too-willing audience. Raucous laughter filled the auditorium as Zoe delivered hilarious jokes one after another. She has a strong stage presence and is clearly very comfortable when it comes to making a large group of people laugh. I was impressed by how easily she managed this, simply telling stories and receiving deafening laughter in return.

Her natural charisma and ease in front of an audience makes her incredibly easy to watch, and her observation of people makes for some hilarious stories that rang too true for many. Not all her jokes hit the mark every time, often splitting the audience instead between those who found the joke funny and those who didn't. Personally, I really enjoyed Zoe's set. I may not have been constantly laughing out loud, but all her stories made me smile, and I wasn't surprised to often find myself laughing.

Zoe is clearly a very popular comedian, and she put on a fun and light-hearted show that everyone enjoyed. Her quirky and fun-loving nature made for a great show full of laughter and happiness, which captivated the audience from the second the lights went down. It is a great show, and I recommend you go and see it.

Zoe Lyons: Little Misfit is on at varying times throughout the festival, until August 28th at Gilded Balloon Teviot. 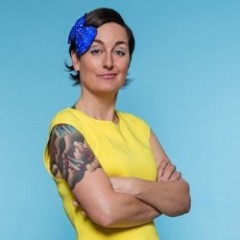 A lively and funny show from the great Zoe Lyons.