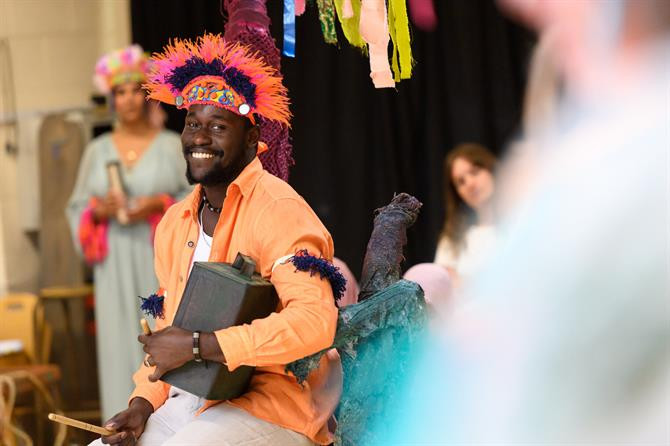 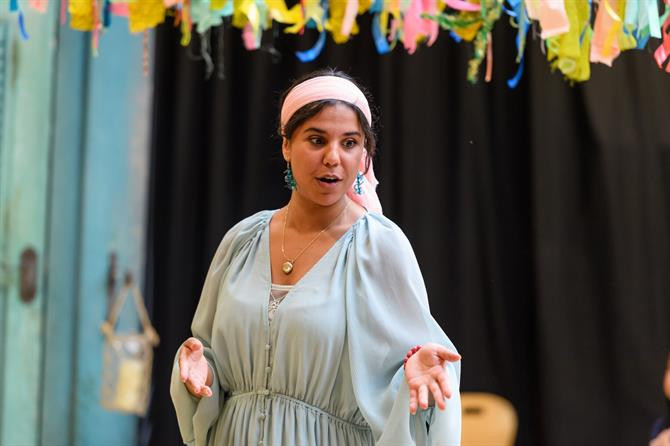 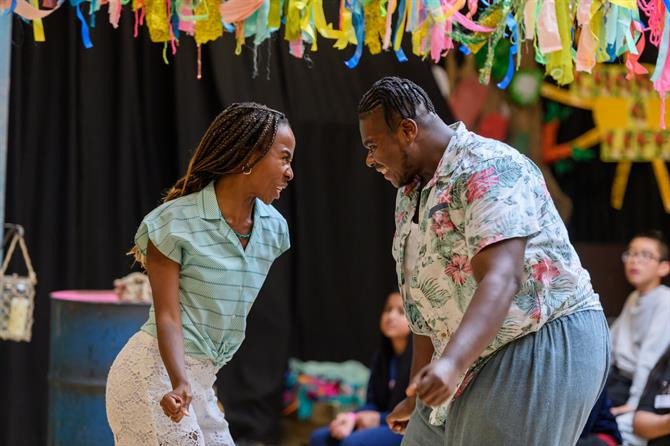 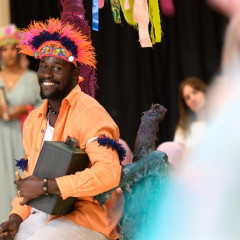 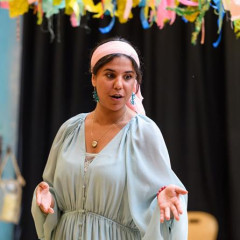 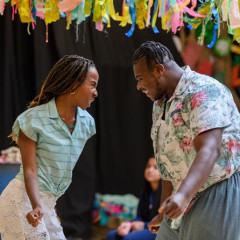 The Royal Shakespeare Company undoubtedly succeeded in presenting a funny and accessible performance of Twelfth Night, not only for the year six pupils of Springhead Primary School, where the travelling First Encounters performance took place, who excitedly took part in the play, but also the multiple older audience members who, when asked prior to the performance, said they had never seen a Shakespeare production before.

In the production, directed by Robin Belfield, the combination of physical comedy, bright and well thought out set design, audience interaction and live music & sound effects performed by the actors to tell the story of “heartbreak, hoaxes and hidden identities” created a fun atmosphere. This allowed for the comedy of the play to shine through to the modern audience, confirmed by the consistent laughter which I believe demonstrated the true timeless comedy of Shakespeare’s writing and the talent of the six performers: Ibraheem Toure (Orsino); Laura Smithers (Olivia); Daniella Agredo Piper (Viola); Alice Blundell (Feste); Pérola Congo (Maria); Emma Manton (Malvolio); Stanton Wright (Sebastian/ Sir Andrew Aguecheek); and Tyreke Leslie (Antonio/ Sir Toby Belch).

Within the performance, there were two significant moments of audience interaction which did require a break from the action of the play, as two adults were asked to perform minor roles, including a priest. While this could be seen as a risky creative decision to make, the two men who took on these roles were incredibly enthusiastic with the actors and entertaining to watch. This choice also made the play feel more personalised to the community of the school and was a clever way of dealing with the small eight person cast which had already required two actors to multirole, using different costumes.

The stage design by Georgie White was effective in the small space of the school hall in conveying the vibrant island setting and through the use of two doors clearly was able to set the scenes of Duke Orsino and the Countess Olivia's houses. The audience sat on three sides facing the performance area on chairs and school benches, and the pupils performing on mats at the front, creating an intimate atmosphere which I believe contributed to the production’s accessibility and fun in a way which may not have been possible on a raised stage. The children taking part were clearly thrilled with their role in the play, however the layout of the stage, lacking wings or an offstage area before returning to their seats where they could expel their excitement from performing, did occasionally mean that their voices were heard above the actors following their scenes, however equally this does illustrate how much they enjoyed being a part of the piece and the positive nature of the First Encounters project on them.

Within the set design there appeared to also be a subtle environmental message with items such as bottles being used amongst the actors’ conventional instruments, such as the accordion. I felt this commented on the idea of pollution and debris on the island, adding an interesting contemporary element to the piece and one which is particularly relevant to the young pupils performing.

Potentially, the play being abridged to just 90 minutes did simplify the plot, as previous productions, such as the Globe’s in 2021 lasted two and a half hours, which may have contributed to the outcome for the characters feeling incredibly obvious. However, this decision meant that there was never a boring moment on stage, a fear of which likely contributes to the modern stigma towards Shakespeare for many, with the pace leaving me surprised that an hour and a half had passed in the hall.

Overall, the production was very successful and demonstrated the ongoing value of Shakespeare to modern audiences, specifically those who do not regularly, or perhaps never have, engaged with his work. I hope that companies continue to produce this type of work, creating a new generation of appreciation for Shakespeare and theatre more broadly. 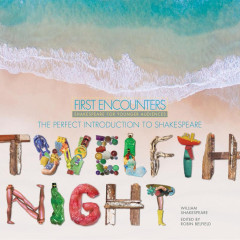