Cyberpunk 2077 is a game that, as the name suggests, is influenced by the popular media genre of cyberpunk. During the initial launch of the game back in late of 2020 the game had quite a negative response from critics and gamers alike as they were disappointed with the game and how it felt unfinished with it’s many bugs that many players, myself included, experienced . Some of these bugs that I experienced were falling out of the map as I was exiting the vehicle, being thrown across the map when in a battle and glitches with some of the nps animations. Now with update 1.5 the game feels fixed.

Cyberpunk 2077 is a game with a significant amount of customisation for your character including a variety of skin tones and many different facial features including eyes,eyebrows, noses,lips and scars to allow a variety of different combinations to make a suitable character for you or allow you to create yourself. The customisation also includes makeup for both male and female characters as well as piercings and tattoos to further customise a character. These features are rather common to find in games games however that sets cyberpunk 2077 apart from the other games is two specific features one of these is being able to choose the voice that your V uses meaning that, if you want, your female V can have a masculine voice and your male V can have a feminine voice. Another feature that sets apart is being able to to customise your genitals as well as pick the size of the penis which is a good due to the fact that it further allows players to create a character to identify with, however other then the gear selection menu if your character is naked you will not be able to see it in game. 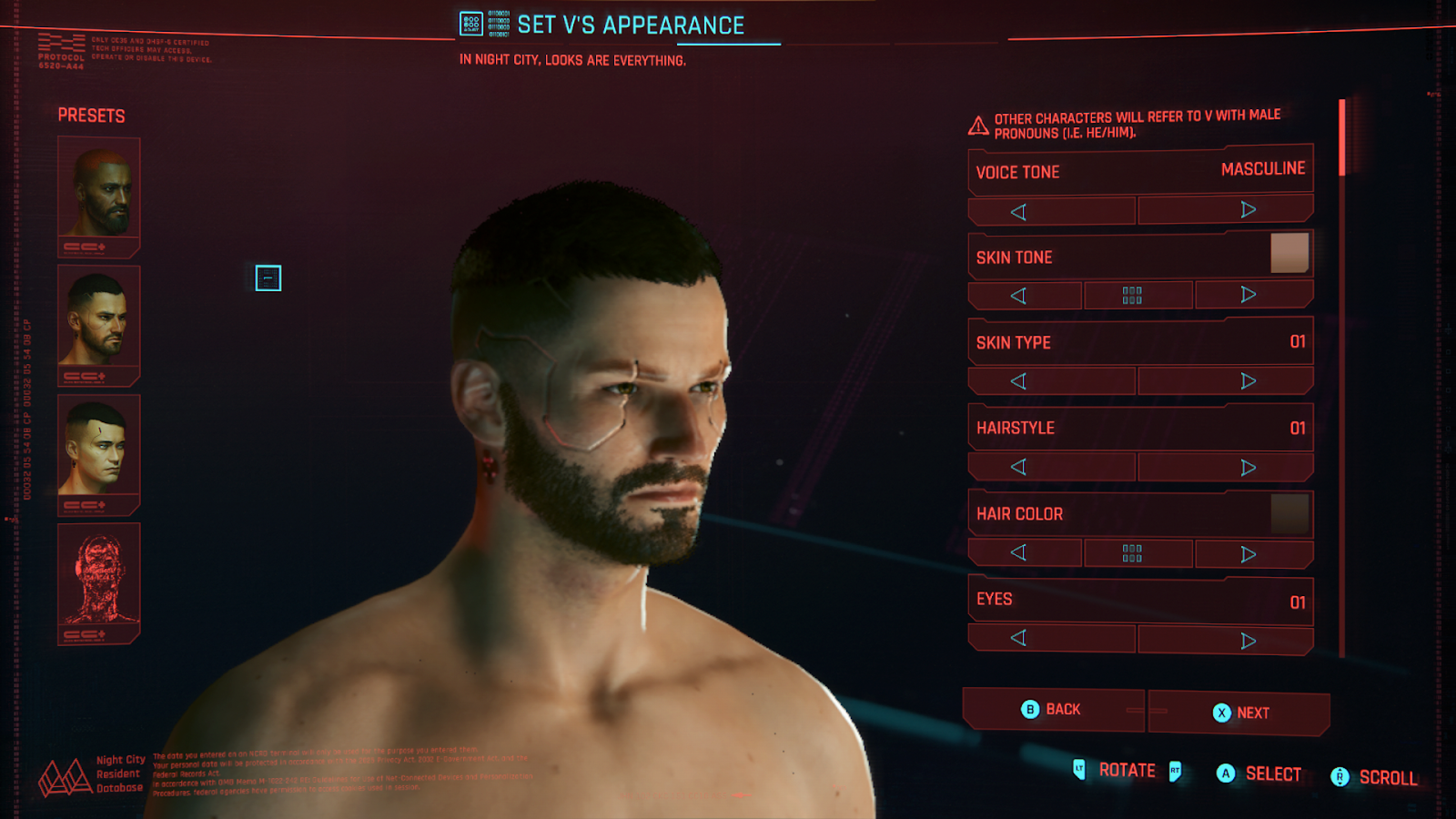 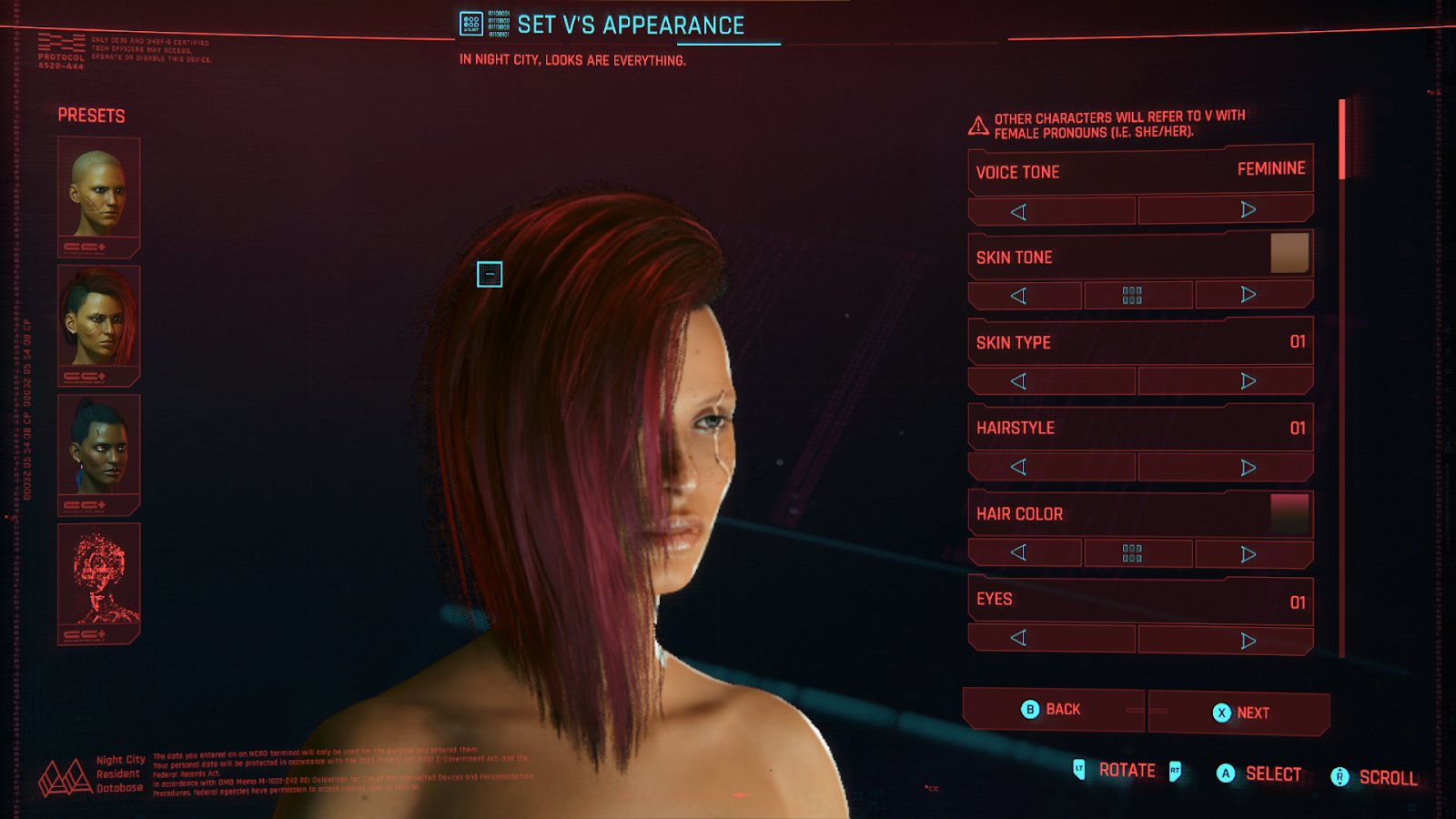 The gear system in the game is fairly simple, there are multiple stores around the map being clothing stores and weapon stores were you can buy gear with money that you get from missions including the main story, gigs and side missions, these pieces of gear can not just be bought but also found around the map, some of them anly being found there. There are also different tiers of gears being common, uncommon , rare, epic and legendary and depending on which level you find them will determine the states meaning a legendary gear that you find at a lower level will have lower states then a rare gear that you find at later levels which feels quite unbalanced. I love the variety of clothes that the game provides however I do wish there was more options as the nps in the game have a lot of clothing that is not available, I also wish that they would ad an ability to add accessories to your character such as necklaces, socks, tights bracelets and watches to further customise your characters outfits. 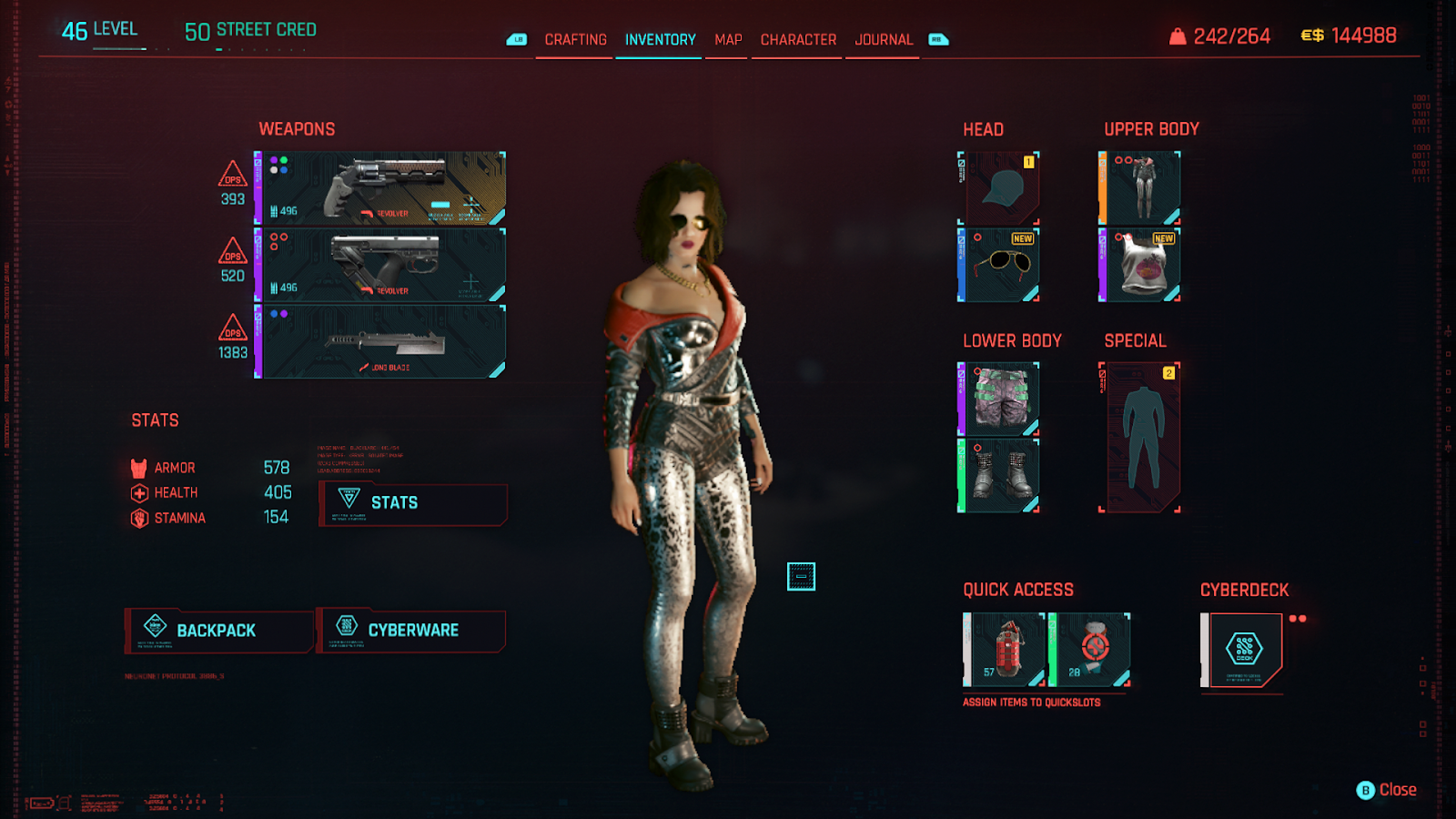 The scenery around the map is beautiful and bright with neon lights and constant moving and noise in the background of the cities to further immerse you into the world even if it can be quite too much sometimes. The map also includes many programmed sequences that appear as you walk around the city including gang fights, respawnable enemies that will appear in areas and events of maxtech going out and saving  someone  which further allow there to be more of an active and real world. There are many different details in the world that will probably never be noticed in an average playthrough but are quite nice to see when actively looking around the area. 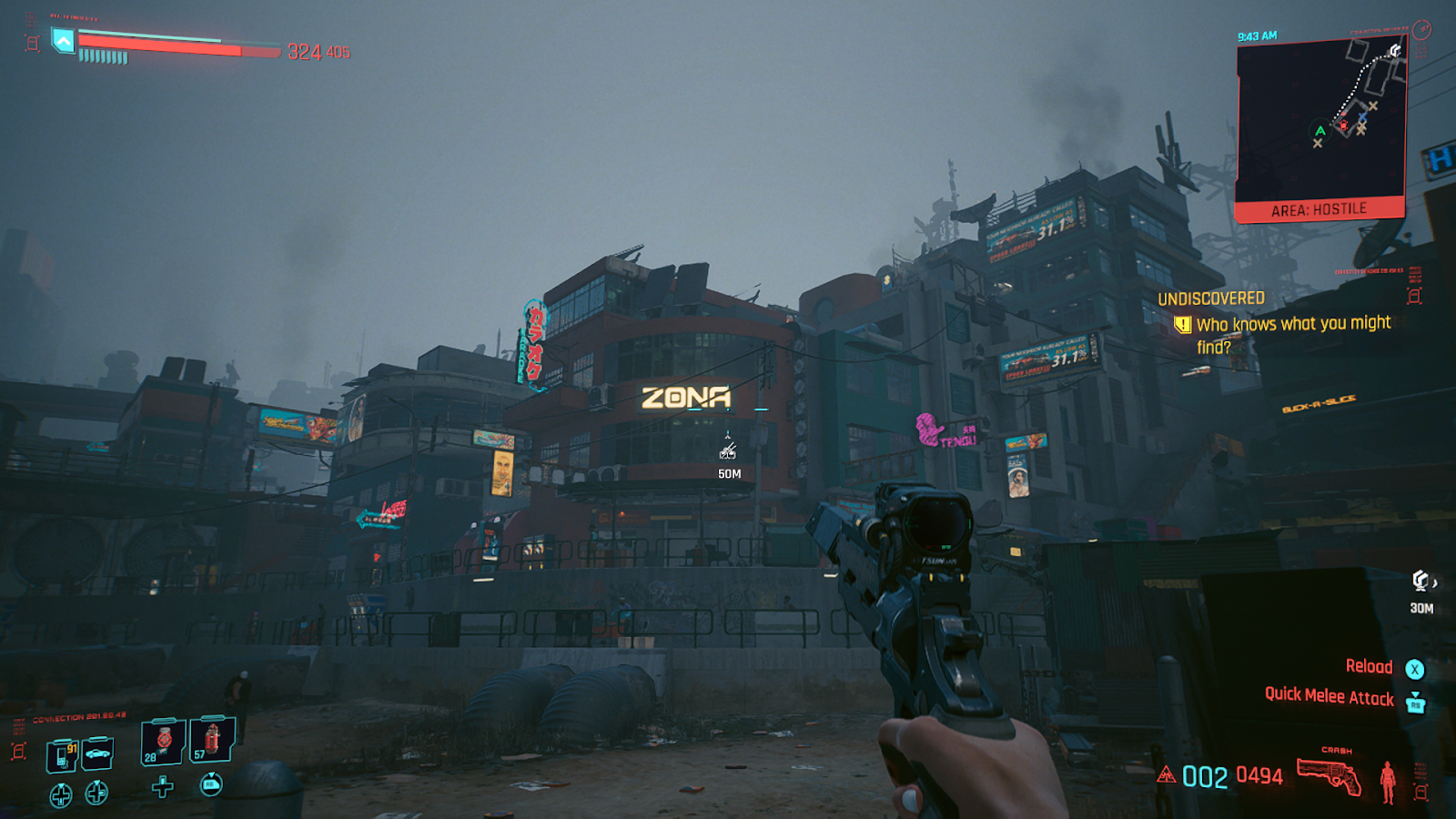 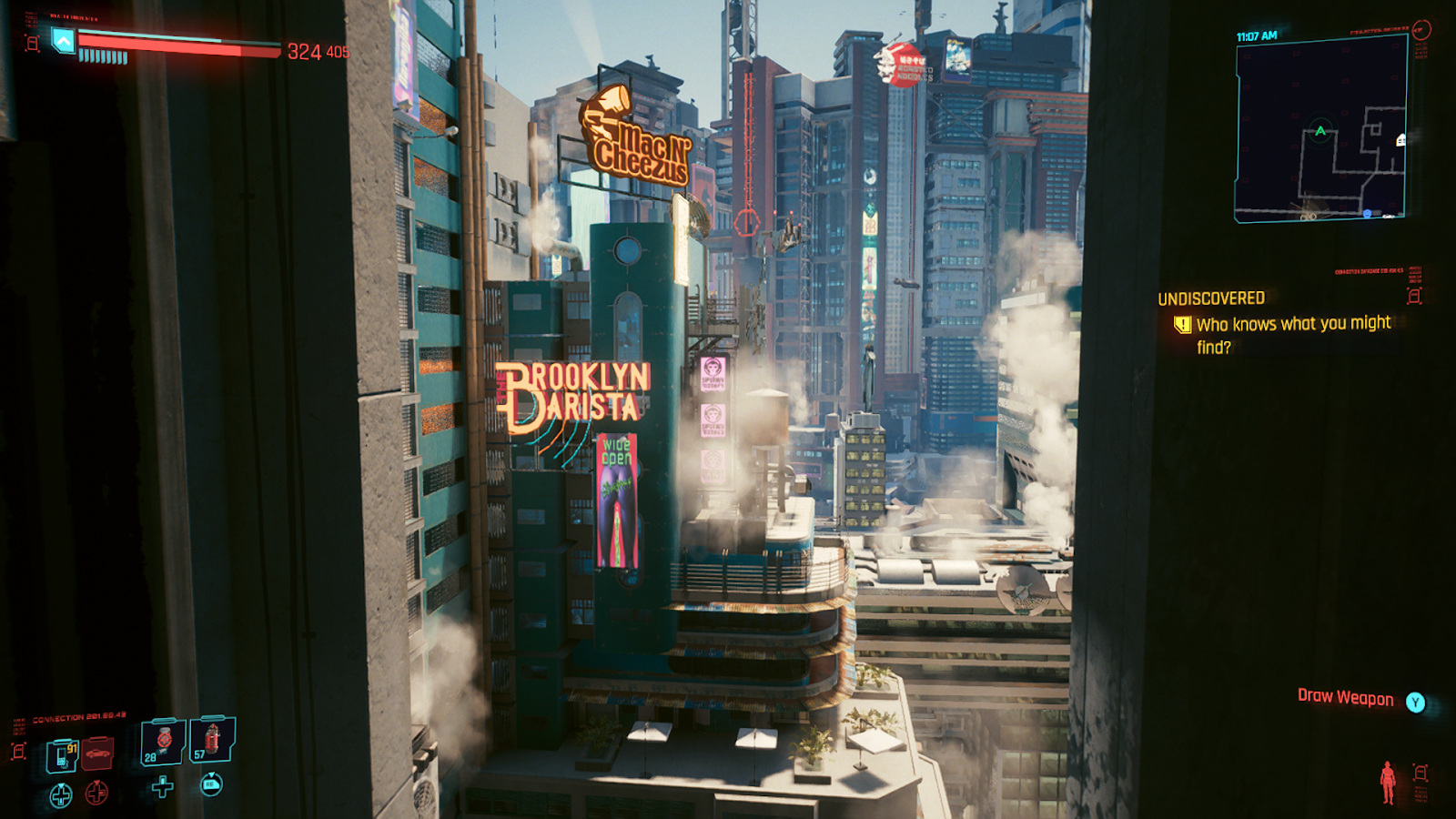 When it come to weaponry the game has quite a large amount of both ranged and melee which only increases when including the cybernetics that you can buy, earn from quests such as the katana that is gained from completing the japantown gigs , collect from enemies killing enemies and just finding laying about.the map.

The game also has an interesting story and world building which can be found through the initial loading screen that changes as you progress through the story as it gives you information mainly through broadcasts which link into the actions of your character. There is also little data shard that you can look at and information that is stored on the computers. Another way they show this is through voice lines of npc’s for example in kabuki there are two members of the tiger claws gang that are having a conversation with a police officer who seems to be working with them. The main story itself is rather short with a lot of choices for example (some of them being secret) such as when you choose to trust Johnny or to trust Hanako or when arasaka comes to save hanako and there is a secret opportunity to save takemura. After you finish the game however, it will give you the opportunity to go back to the point that you were at before you go into the ‘dead end’ where you are no longer able to do missions outside the main story until you finish the game.

I have personally had a rather positive experience with the game so far despite the major glitches that can happen as I have been able to enjoy myself however the game can get quite boring after a while after finishing the story as there is not much content left. 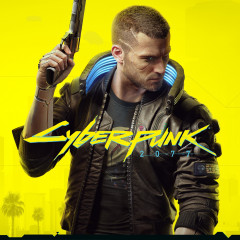