Brodkin is an 'anonymous prankster' no more

You’ve probably heard of, or seen, Simon Brodkin before. He is responsible for a number of high-profile stunts including handing Theresa May a P45, and delivering swastika-labelled golf balls over to Donald Trump when he visited Scotland. Despite all that, he’s still not famous enough to get onto I’m A Celebrity… Get Me Out of Here!, papers still can’t put his name into their headlines, and he’s got beef with the fact he’s called an ‘anonymous’ prankster. Of course, this show unpicks this.

It’s a packed show at Pleasance Cabaret Bar, a cabaret bar that wasn’t necessarily the one Brodkin originally pictured. Nevertheless, Brodkin begins his set on his former antics, politics and the war in Ukraine – yes, you read that correctly. It’s definitely sensitive material to work with, but Brodkin leads the audience through it.

Brodkin is fascinated by Volodymyr Zelensky, a former comedian turned great political war hero. A former comedian whose style he aims to mimic in his next big prank on Putin when he gets tried for his crimes. Brodkin switches gears and focuses on the Scots marching on England, and how Geordies would save enough time for the rest of the country with their hard-hitting resilience.

The only entities that cross a line here are three hecklers sat at the back who shout “you’re not funny” at the Trump gags, and start saluting during the comedic Russian criticisms – Brodkin handles this like a pro, and doesn’t allow it to deter his set in any way.

This is Brodkin’s most personal show yet, telling us of his gym addiction, ADHD diagnosis and how his ancestors fled Russian persecution. It’s when Brodkin digs into these topics that he balances this really interesting mix between comedy and vulnerability – he diverges from his satirical schtick and over-used British political gags, into something that has a lot of potential.

By the end of the show, instead of a character, we’re just faced with Brodkin himself whose stories and takes are a lot funnier and fresher than what the set originally began with. Brodkin might be labelled an ‘anonymous prankster’ but this show proves he is a capable comedian too. 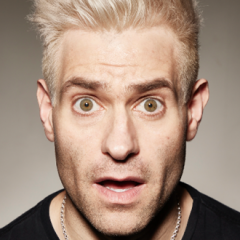 Brodkin is an 'anonymous prankster' no more