Voice MagBlogs‘I was in a poetry p…

A somewhat unexpected email arrived in Beth Davies’ inbox when she was out having lunch with her friends. When Davies found out she won the 2022 New Poets Prize, she interrupted the conversation and banged on the table in her excitement to break the news. Anyone who interacted with her for at least 24 hours post-email can probably attest that she was “vibrating with excitement” – completely understandable when the top prize, awarded by The Poetry Business, is a publication deal for her debut pamphlet.

The 24-year-old from Sheffield will have her debut pamphlet published next year, which will feature: a poem about IKEA; a piece about a jar of dead beetles; another about dissecting a rat. “That’s my pitch!” Davies enthuses over a video call.

The pamphlet is called ‘The Pretence of Understanding’, pulled from a phrase in one of the featured poems. “There’s this wrestling of trying to understand things, but also realising that you can’t really understand them … that kind of conflict is what I chose that title for,” she adds.

This isn’t the first time that Davies entered the New Poets Prize – she actually submitted three times before. When she entered the fourth time and won, it made it all the more special to her “because it did kind of feel like a culmination in some sense”. This time around, she managed to sneak in a nod to her first-ever entry because she submitted a version of a poem that appeared in her original entry a few years ago.

“Preparing each of those entries has really helped me grow as a poet, I think it is a different experience to try and imagine yourself as someone who has a body of work. I first entered when I was 19, or 18 perhaps, and so at that stage, for me to even think of myself as a person who could imagine having a pamphlet – even conceptualising that was a major step for me,” she ruminates.

Davies was never an “I’ve always been a poet” sort of person, her first go at writing started at school. “I remember as a child, I was very into the idea of being a writer. Maybe I didn’t write very much, but I was very into the concept of it. I did start exploring ways in which I could have that as an interest rather than a theoretical thing,” she adds.

Throughout her teens, she moved between stories and poetry and then at one point, “I was just kind of in a poetry phrase and it didn’t end. I realised that was more my thing.”

A big breakthrough for Davies was realising poems didn’t have to rhyme. She sifted through a great deal of self-dubbed “bad” poems that “desperately” attempted to force that unwritten rule. When she realised that poetry could be about focusing on language and form in different ways, not always following a strict set of rules, the freedom of it really appealed to her.

For Davies, poetry can distil an idea or feeling in a way that other forms of communication cannot. “There are so many things that are difficult to put into words,” she adds. By that logic, poetry becomes a contradiction. It is words arranged on a page in a certain way, but the power in it is “that so often it’s trying to express things when there is not necessarily words for it, or the words that there are for it don’t feel enough in some way.”

“This makes it sound like I’m always writing about grand stuff – I’m not – but sometimes, the small things deserve that sort of treatment as well,” she highlights.

When Davies reads back her older work, she is often stricken by her past and thinks “oh god, that’s how it felt at that time”. It also expands to other writers’ work; “sometimes when I read other people’s poetry it reaches in and hits you with an idea or feeling in a way that maybe prose can’t always do. I don’t know what it is about poetry that makes me feel like it can do that sometimes.”

In some ways, poetry is still a mystery to Davies but it is one that she attempts to navigate herself when writing her material and reading other poets’ works ranging from Caroline Bird, Raymond Antrobus, Rachel Long, Ada Limón and Helen Mort.

“When you read a poem, whatever it’s about, the way the poem is given that space on the page […] You think this is a feeling or an idea that mattered enough in some way, to give it that space and attention to every word and every line break,” she says.

What inspires Beth Davies? Weird details and even weirder situations – “life is just strange in many ways,” she says. It is the moments where we question “what is this?” that end up grasping Davies’ attention, and to illustrate her point further Davies proposes an “objectively strange anecdote” to me – one that is entirely bizarre but equally as remarkable.

One day, Davies heard a story about how her grandmother used to get fish posted through her letterbox. The local fishmonger would deliver straight to people’s houses, and Davies’ grandmother didn’t want to be up at the time so the fishmonger would post it through the letterbox. It was a scene so mystifying, that Davies just had to scribble a poem about it.

It’s “those moments where you’re just like what? I think there is quite a lot of that in life when you start looking for it because things don’t necessarily fit together […] I think poetry is a good way of acknowledging that contradiction because poetry doesn’t expect things to be straightforward or ‘normal’ – whatever that is,” she explains.

Ask Davies about her favourite poem that she has written at any moment, and you’d be given an entirely different answer each time. Davies describes a “honeymoon period” just after penning a poem where she’ll think “wow this is the greatest poem ever, I’ll never top this!” that is until a couple of weeks later when she starts to feel critical and self-conscious about it. Whatever is in that “sweet spot” is her favourite, but it doesn’t necessarily correlate to what she views as her better-quality poems.

When Davies read a poem at her grandfather’s funeral, it was an integral moment for her but it’s not necessarily a poem that she’d read again. “I wouldn’t advertise it as here’s one of my poems that everyone should look at, but that is a poem that was important to me in that moment and still is now.”

“I feel like my favourite poem ought to be my best poem, but I’m not sure if that’s necessarily the case.”

It is Davies' unabashed honesty about her relationship to writing which is particularly striking. It is neither preachy nor clear-cut, but instead, a murky reality that many writers probably face. “It’s just always a breeze! I’m not one of those people,” she jokes.

Having just finished up a Masters and heading into a full-time job, life has made it quite challenging to divvy up time for poetry. “I guess it’s the case with any creative pursuit, there are other things demanding your attention,” Davies mentions.

Davies tries to find time and set a rhythm when she can, but also forgives herself for not. Writing how she wants to, on her terms, is far more important than the assumption that you’ve “failed as a poet if you don’t write every day.”

“Even when you have the time and you sit down to do it, it’s difficult to shape things in a way that feels right … I’m learning to be okay that I don’t write a great quantity of poems because maybe that’s just not my approach and actually that doesn’t make me less of a poet.”

In a moment of quiet confession, Davies mentions that sometimes in interviews she “ought to pretend to be one of those” super prolific writers, or “proper poets”. However, “that doesn’t necessarily benefit anyone,” she importantly highlights.

“Sometimes, I’ve liked it when I’ve spoken to another poet and they’re like I haven’t written much lately and that’s okay,” she builds.

Digging deeper into what even is a “proper poet” nowadays, Davies replies: “Exactly! I think it’s a very unhelpful concept, it’s always a concept that has niggled at me. It’s partly an imposter syndrome thing. There are all the proper poets, and then there’s me -- fake poet -- who has somehow convinced them! But I do think that is nonsense.”

“Anyone who has written a poem is a proper poet, is what I actually think in my logical what I believe brain. Then my nonsense insecurities brain is obsessed with this notion of a ‘proper poet’,” she notes.

Davies isn’t sure whether the origins of the ‘proper poet’ myth is an opportunity to psychoanalyse herself, or the entire history of poetry.

To some extent, in any role that requires some sort of skill or expertise, it is easy to think that there are some people doing it properly, and then others who are not and “maybe that’s just an obsession generally.”

When it comes to poetry specifically, Davies thinks the notion of a “proper poet” is down to the mythologising of it: “I think you can talk about poetry as this thing that is special, valuable and unique without falling into the trap that only some people have true access to it. Maybe it’s easy to slip from one to another. But what does that mean for someone to be special in a way that means they can call themselves a poet? I don’t think it’s a helpful focus. Maybe that’s a focus only I have.”

What’s next for Beth Davies? Well of course, her upcoming pamphlet ‘The Pretence of Understanding’ is set for release midway through 2023. Recently, she completed a Digital Residency with The Poetry Business writing a series of blogs reflecting on poetry which you can read here. You can find Davies on her website and Twitter.

This interview is part of ‘Line Break’, an interview series with the UK’s most exciting emerging poets in 2022 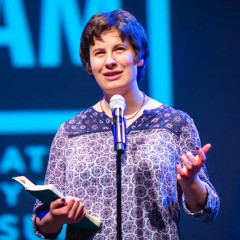 ‘I was in a poetry phase and it didn’t end’: in conversation with Beth Davies