When a queue stretches as long as the one for She’s Still Got It! – you know you’re in for a treat. Fresh off winning the crown and title of Queen of All Queens in Rupaul’s Drag Race All-Stars, international drag superstar Jinkx Monsoon is accompanied by Major Scales on stage for an entertaining hour bursting at the seams with comedy and music.

If you didn’t know of Jinkx Monsoon, what a brilliant introduction. Welcome. You’ve just been initiated into a sold-out and cram-packed Spiegeltent, and are about to witness some of the sharpest and scathing wit you’ve seen to date. Jinkx Monsoon does not disappoint, and there’s something almost holy in how the audience reacts to her audience interaction. When Jinkx tells you to stop clapping along to a song, you stop. When Jinkx tells you to clap, you clap. Jinkx Monsoon’s aura is so magnetic, that you naturally lean into every word she says.

Major Scales, accompanying Jinkx Monsoon on stage, is equally as captivating – the two exist on the same plane of energy, they’re both clashing heads as part of their shtick yet they’re equally as loveable.

The two sift through classic pop songs and their own original numbers – transforming all into Vaudeville Broadway-sounding hits. At times, the duo break their act to disagree on how the show should progress – arguing about whether they should make the next song upbeat or solemn. They conclude that they should just change the minor scales to major ones, making a song about dying and change preppy and hilarious without abandoning its rooted cynicism.

An absolute highlight of the show is the performance of Cartoons and Vodka from The Ginger Snapped album. Above the stage, there is an accompanying animation pulling from a myriad of popular shows, from Adventure Time and Sailor Moon to Beavis and Butt-head.

You also have your fair share of quips about Jinkx's new crown which always manages to echo its way back into the material. When Jinkx speaks out on climate change, she reminds us of a time an audience member shouted: “eat the rich” and how she isn’t so sure about that herself now after winning $200k. There’s also a much-loved sneaky hint of Jinkx Monsoon’s Judy Garland impression, one that in itself is truly star-worthy material – but like a pro, Jinkx doesn’t focus on it for too long and keeps the show in a clear direction.

A discussion on toilets turns from crude to hard-hitting truths. Jinkx navigates through the concept of men feeling so comfortable in the toilets they use, to anecdotally retelling her experiences being both misgendered and barred from toilets. Concluding the set is something that is heartfelt – not only is it a sky-rocketing cover of David Bowie’s Life On Mars, but it’s a reminder to the audience that no one should police toilets with their “you’re in the wrong place” jabs and mock the intelligence of those using them because they know full well what they’re doing.

Jinkx Monsoon is infectiously funny on that stage, not only has she all the effortless charisma of a Hollywood Golden Age performer bouncing down a red carpet – she’s also an incredibly wise and witty storyteller. Jinkx Monsoon: She’s Still Got It (with Major Scales) is an hour that flies by, covering topics like gender politics, mental health and climate change – these weightier subjects are handled with the utmost care and completely refreshing perspective. By the end, you’ll want those songs on repeat – after all, who doesn’t want to be singing about death in a major scale? 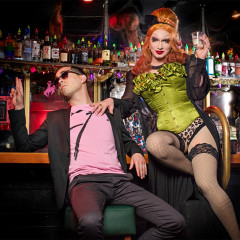 Jinkx Monsoon: She’s Still Got It! (with Major Scales)