This 90-minute theatre piece by Theatre Ronin is an ethereal tribute to Wuxia.

Practice of Zen is an hour-and-a-half theatre performance consisting of a series of vignettes featuring enchanting choreography that was written and directed by Alex Tam Hung Man. If you’ve ever seen martial arts films like Crouching Tiger, Hidden Dragon (2000), House of Flying Daggers (2004), or some of the more classic wuxia films such as A Touch of Zen (1971) – or any King Hu film for that matter – then you will certainly recognise a lot of things about Practice of Zen.

The literal translation of “Wuxia” is martial (wu) chivalry (xia), though it can also be translated as martial heroes. It is a Chinese fiction genre that concerns martial artists in Ancient China, and as well as that core plot point, the films belonging to the wuxia genre are characterised by supernatural free-flowing movement, melancholic romanticism, and fantastical battles between martial artists and the codes of honour they adhere to. With that in mind, Practice of Zen is a wonderfully choreographed tribute to the Wuxia genre.

Performed in Cantonese with Chinese and English subtitles, Practice of Zen evokes many of the same emotions that watching a King Hu film would inspire. It does, however, take a little patience to get into it. It’s certainly not the most accessible piece at Brighton Fringe, with a 90-minute runtime and a target audience that feels rather niche – the overlap between people who know and appreciate Wuxia and those who would be interested in watching a Theatre Ronin piece at Brighton Fringe may not be particularly high. That being said, an appreciation or knowledge of Wuxia is certainly not a prerequisite for being able to enjoy Practice of Zen. The fluid, ethereal movement is choreographed very well, and the stories told come largely from folklore and thus are as accessible as it gets, so if you can look past the unconventional storytelling methods you may find something you enjoy.

It would be remiss to not mention the excellent lighting design, music and sound design, and costume design by Zoe Cheung, Maj Chan, and Cindy Ho respectively. Each of these elements play such an important part in making a piece like this, and they were all done well enough that they only ever added to how immersive Practice of Zen was, rather than took away from it.

All in all, Practice of Zen is an interesting piece by Theatre Ronin with some great choreography and production value, but it is ultimately let down slightly by its unnecessarily long runtime and the occasional stretches that feel a little drawn out.  They do succeed in evoking the spirit of Wuxia, though, and the performances are as fantastical as the genre deserves. 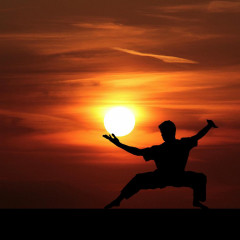 This 90-minute theatre piece by Theatre Ronin is an ethereal tribute to Wuxia.