The Edinburgh festival will be returning in 2023, much to the delight of music fans

Connect Music Festival took place on 26-28 August, at the Royal Highland Centre in Edinburgh, Scotland. The festival took place on the outskirts of Edinburgh, by the airport – which made for some awe-inspiring sights as planes took off from a runway not far from the main stage. The Chemical Brothers, The National, Bombay Bicycle Club, Bonobo, The Twilight Sad, and IDLES are just some of the major acts that took to the stage at the new (well, not really) festival, and with the sun shining all weekend it turned out to be quite the occasion.

Unbeknownst to some, Connect had actually been held before in 2007 and 2008, and it attracted just as many big names then as it did this year. There was even some overlap; The Twilight Sad performed as a new/rising artist in 2007, returning this year to play on The Grand Parade (main stage), while Idlewild and Mogwai also made a return. After the financial crisis in the late noughties, the 2009 festival was unfortunately cancelled, and it did not make a return after that until now.

It was worth the wait. The line-up this year was incredible, and although there were so many beloved acts performing this year, there weren’t many clashes at all for those who wanted to see the biggest names. The festival ground was fairly small and easy to navigate, and one or two brief showers aside, the lovely weather meant that the grass stayed green.

Friday came and the festival kicked off with the likes of Maeve and Future Utopia on the main stage. Jessie Buckley & Bernard Butler — whose collaborative album For All Our Days That Tear the Heart was recently shortlisted for the 2022 Mercury Prize — followed, while Moses Boyd and LYRA brought good vibes to the Guitars & Other Machines stage. The Friday highlight for most festival goers however was subheadliner IDLES, who brought immense energy to their performance that was returned tenfold by the crowd. Frontman Joe Talbot more than once split the crowd into two halves and had them collide with one another, and that energy was maintained right up until Rottweiler, their final song of the night. Quite impressive for a Friday night act that were a bit of a last-minute replacement for the Bristol-borne Massive Attack.  While it took a while on Friday for the grounds to fill up, by the time the sun was setting, the crowds were large and lively enough for what is basically a first-time festival, and they only grew on the second and third days.

Saturday kicked off with Chloe Moriondo and Holly Humberstone on The Grand Parade, while Guitars & Other Machines drew a respectable crowd for NewDad and Willie J Healey among others. There was also Unknown Pleasures, which seldom drew a large crowd but never failed to provide magnificent vibes and a great place to have a boogie with their programme of electronic and dance music. It was also the closest stage to the main entrance, which was a lovely way to set the mood for the arriving music fans. The rest of Saturday on the Grand Parade featured a fantastic line-up of Caribou and Bonobo, whose upbeat electronic and dance music sandwiched Scotland-native The Twilight Sad’s expressive performance. Adding to the emotion behind their set, The Twilight Sad paid homage to Scott Hutchison by covering one of Frightened Rabbit’s songs while Scott’s brother Grant Hutchison was on the drums.

A major highlight of the Saturday was The Chemical Brothers’ performance, which was well deserving of its headline spot. Accompanying their set was an impressive lights display with some cool visuals, which may have made it difficult for the photographers, but the result was one of the more unmissable events of the weekend. As good as it may have been, it was tough to choose between seeing The Chemical Brothers and watching Ride put on a performance of their 1990 album Nowhere on the Guitars & Other Machines stage.

As good as Saturday was, it was the final day that stole the show. Sunday featured an insane line-up of Black Country, New Road (who were recently shortlisted for this year’s Mercury Prize), Self Esteem, Little Simz, Bombay Bicycle Club, Mogwai, and The National… and that was just on the main stage. Elsewhere, the likes of Idlewild, Admiral Fallow, and Horse Meat Disco were drawing sizeable crowds, though you could have stayed at The Grand Parade pretty much all day long and had a continuous source of brilliant live music. Little Simz put on an impassioned and profound show, and certainly wasn’t one to miss, while Bombay Bicycle Club enthused the crowd and inspired a lot of dancing. The highlight of the night – and probably the whole festival – was The National. Incidentally, that doesn’t only describe their Sunday night headline.

An hour or two before they graced the main stage, they did a secret set at the Tiny Changes X Gardeners Cottage, where various acts had been performing all weekend in secret acoustic sets (though The National were undoubtedly the biggest name to do so). Tiny Changes is a charity set up in memory of Scott Hutchison, the Frightened Rabbit singer who sadly passed away in 2018, and those lucky enough to attend the secret set that evening at the Gardeners Cottage got to see a touching acoustic performance of This Isn’t Helping and About Today, as well as brief discussion of mental health and its importance in memory of Hutchison. Short though it was, it was also a rather emotional affair and it set the stage perfectly for the final performance of the weekend.

When they did eventually grace the main stage, it drew probably the biggest crowd of the weekend, and they delivered a powerful and poignant performance featuring as many of their most-loved songs as you can fit into one set, as well as their newest single Weird Goodbyes, which many were excited to see live. It was the perfect way to cap off a wonderful weekend in Edinburgh, at the first Connect Festival in fourteen years. There’s some good news, too: they have already announced that it will be returning next year, so anyone who was unfortunate enough to miss it this year should absolutely have their eyes set on August 2023. 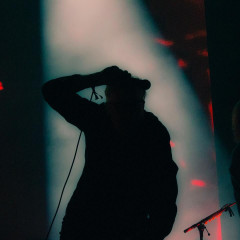 The Edinburgh festival will be returning in 2023, much to the delight of music fans