Noughts and Crosses simply don’t mix. Against a background of prejudice and distrust, highlighted by terrorist activity, a romance builds between Sephy and Callum -- but it will lead them into terrible danger. Can they find a way to be together?

Malorie Blackman’s Noughts and Crosses book is as fresh and powerful today as it has ever before – and, given the current societal tendency towards increased binary division, even more so.

In this ground-breaking novel, she unconventionally divided the population in two: the white Noughts are second-class citizens, and the black Crosses are highly respected and perceived as the superior race. 15-year-old Callum is a Nought, and his best friend, Sephy.

The story focuses on their relationship, which is deprecated by society, and explores the discrimination they encounter at every turn. By reversing the conventional racial stereotypes and presenting the White population as the persecuted race, Blackman has skilfully shown racial prejudice from a different viewpoint.

At the time the story is set racial tensions still run deep – with Crosses, a dark-skinned elite, ensuring the pale-skinned noughts, whilst no longer technically slaves, remain very much second-class citizens.

Against this backdrop, Malorie Blackman throws a pair of star-crossed young lovers – Sephy, the daughter of a powerful Cross politician, and Callum, a nought whose mother works as her nanny for Sephy and her family until she is unfairly dismissed.

However, whilst the young people’s developing and emotionally authentic relationship is at the heart of the series, this is no sweet teen romance. Fear, violence – physical and sexual – terrorism, mental illness, betrayal and grief are all part of their narrative; and although there is hope to be found, it’s in the context of some extremely harsh truths about what human beings are capable of doing to each other, when they feel threatened, oppressed and afraid.

As well as being a compelling tale of love and friendship, this is an outstanding and thought-provoking exploration of the futility of prejudice. A contemporary classic.

I thoroughly enjoyed this book and would highly recommend the noughts and crosses book to anyone. Anyone at all. 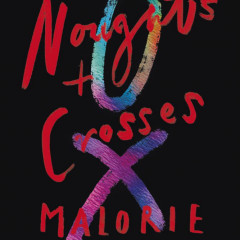 Noughts and Crosses simply don’t mix. Against a background of prejudice and distrust, highlighted by terrorist activity, a romance builds between Sephy and Callum -- but it will lead them into terrible danger. Can they find a way to be together?