This exhibition was extraordinary as it forced you outside of the box and view the world in a different perspective. I thoroughly enjoyed this exhibition and would strongly recommend it to you, especially if you want to embrace you child side.

The exhibition is inspired by a drawing of the Museu de Arte de São Paulo by Lina Bo Bardi. At the centre of the drawing is an unusual looking slide, which they named the Big Red. Neighbouring, children are playing in a collection of animals arranged in a circle on a rainbow painted floor, like an animal roundabout.

In the exhibition everything is bigger than usual like it is being seen through the eyes of a child, creating an innocent and joyful point of view. In ‘The Place We Imagine’, the assemble and schools of tomorrow have rethought these sculptures, bringing them into Nottingham Contemporary’s gallery spaces.

A third sculpture was made in workshops at a school in the assemble and schools of tomorrow trust. Their workshops explored different ways to play, and they looked at the role of curiosity and many ways children participate with play allowing them be in control of their surroundings. The named this third sculpture the “Fun House” which was originally inspired by a clay sculpture that had all the elements that the children from the workshops found important to them. The Fun House is topped with a large green inflatable ball that can be removed from the main structure as well as a sound piece and neon illustrations.

The exhibition is much more than just sculpture though it also includes videos projected high up on walls, forcing you to look up to see them the same way a child would have to look up to see adults, these videos showed the viewpoints of children and how they see and view the world.as cameras were strapped to the children’s torsos and foreheads.

This exhibition was extraordinary as it forced you to look outside of the box and view the world in a completely different perspective. It encouraged you to see things as the child see things with high up videos and slogans and to think how the children think with fragments of fading stories representing the fragmented ideas and thoughts of children.

I thoroughly enjoyed this exhibition and would strongly recommend it to you, especially if you want to embrace you child side. 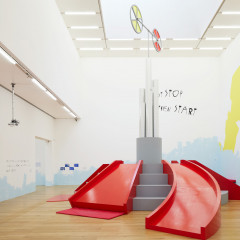 Assemble and schools of tomorrow: the place we imagine – art review

This exhibition was extraordinary as it forced you outside of the box and view the world in a different perspective. I thoroughly enjoyed this exhibition and would strongly recommend it to you, especially if you want to embrace you child side.