Voice MagArts AwardReviewsSingin' in the…

Singin’ in the Rain came to life, showering the front rows with water during the title number – singing in the rain – and delighting everyone else with its faithful version of the iconic movie and quick dance routines such as the great Good Morning. The show may be resting slightly on its glories of the film for this return but there’s still plenty of charm.

The leading man Don Lockwood’s dancing needs more energy, to fit this thrilling show, though he makes up with it with his singing and acting, making him a convincing all-rounder as silent movie star. During the play he must navigate the move into talking films somewhat better than our glamorous leading protagonist Lina Lamont, whose hilarious high pitch and overlooked cunningness get Don into all sorts of trouble, as he is trying updating the talking film with his humorous trio: Kathy Selden who gets tricked into singing over Lina for the redo of the movie ,and Don’s sidekick Cosmo Brown, the hardest-working person on stage, who delivers the funniest slapstick of a number - Make ’Em Laugh. He has a lovely voice, too, which is almost as amazing as his dancing.

Overall, the show is phenomenal even though there are some tweaks that could be made such as, shrinking the space between big numbers or dropping a few more jokes to make it more engaging.  But these are easily overlooked because of the wittiness of the songs, the amusing silent films and the capturing choreography. I would recommend this play to anyone. Anyone at all. 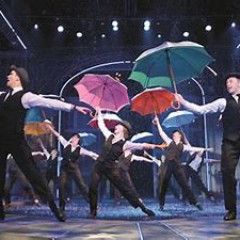 Singin' in the rain - play review