"Your AI overlord bitch can't reach you here. Like I said: it’s just you and me."

We’ve evolved past all that. We don’t kill. We don’t betray. We don’t suffer.

Peace, at last, an end to the conflict, climate change and war. Thanks to artificial intelligence (AI), so it seems.

But unfortunately for our leading man Dryskoll, he lands himself into a bit of a time-travelling mishap. He’s only glitched and sent himself preboot. Tensions are high as nobody has ever returned from accidentally going preboot, leaving Dryskoll to rely on the super artificial intelligence Zimi to get him back, which has a 0.0031% failure rate. Only that slim chance of failure is the very reason he’s there.

Why does my brain feel like it fell out of orbit and landed on a spike?

In this action-packed 60 minute performance, 0.0031% expertly presents a social commentary on current affairs surrounding technology, climate change and geopolitics. Its original storytelling masterfully presents itself in three ways — the main plot, a flashback and breaking the fourth wall, all well-paced. Thematically, it highlights very important issues, including an over-reliance on technology, morality and warfare.

0.0031% raises questions, such as what does it mean to be human? How do you achieve utopia without dystopia? How much is one life worth? What about someone’s conscience?

The entire production is cleverly atmospheric and eerie, matching its dark and gritty tones. The leading man, Malcolm Galea, expertly commands use over a very small amount of space, utilising every last inch, only adding to the production's claustrophobic, grungy tone and danger. Similarly, the selection of props consists of innovative chaotic choices from items otherwise considered trash. Yet, somehow, they only add further to the storytelling, providing crucial moments of comedic dry humour to lighten the grim mood.

It would be interesting to see how the production could be adapted to a bigger stage. Impressively, Galea is both the writer and actor of this production and quickly becomes hypnotising to watch. 0.0031% is a one-man-act yet delivers so many character voices — and that’s part of the beauty of the story. It has no strict identity. It could fit any actor of any age, yet they would all deliver something new to the role. I imagine there could be more potential with a larger space, such as additional lighting and musical choices, but potentially at the cost of losing the suffocatingly intimate atmosphere. Nevertheless, the occasional elements of music positively add to the suspense.

The script can, at times, be very poetic and flowery, but a few minutes into the production and you’re sucked into this new sci-fi world and all its terminology. Although this production was very entertaining, this story would be just as equally entertaining, if not better, in novel form, due to its vast exposition. The writing shines through in the piece, providing just a glimpse at a world that’s been built — and I’m dying to know more.

0.0031% masterfully excels in thought-provoking because, as with any good dystopia, it’s only one or two steps away from where we are now. It’s logical and relies on rationality, expanding our reliance on technology and AI now (such as Alexa’s or autonomous self-driving vehicles) to what could be the next, but ultimately, every bit conceivable and logical, which makes it so terrifyingly realistic. There’s even a surprise plot twist, which was incredibly entertaining.

It’s the type of production to linger on your mind after the show. Then again, that evening and throughout the week, which is my favourite type of reveal.

0.0031% is a thoroughly thrilling dystopian sci-fi social commentary, challenging technology advancements, climate change, and geopolitics in an outstanding performance. A poetic blend of Brave New World x Black Mirror x I Robot; if you enjoyed them, you’d love this. 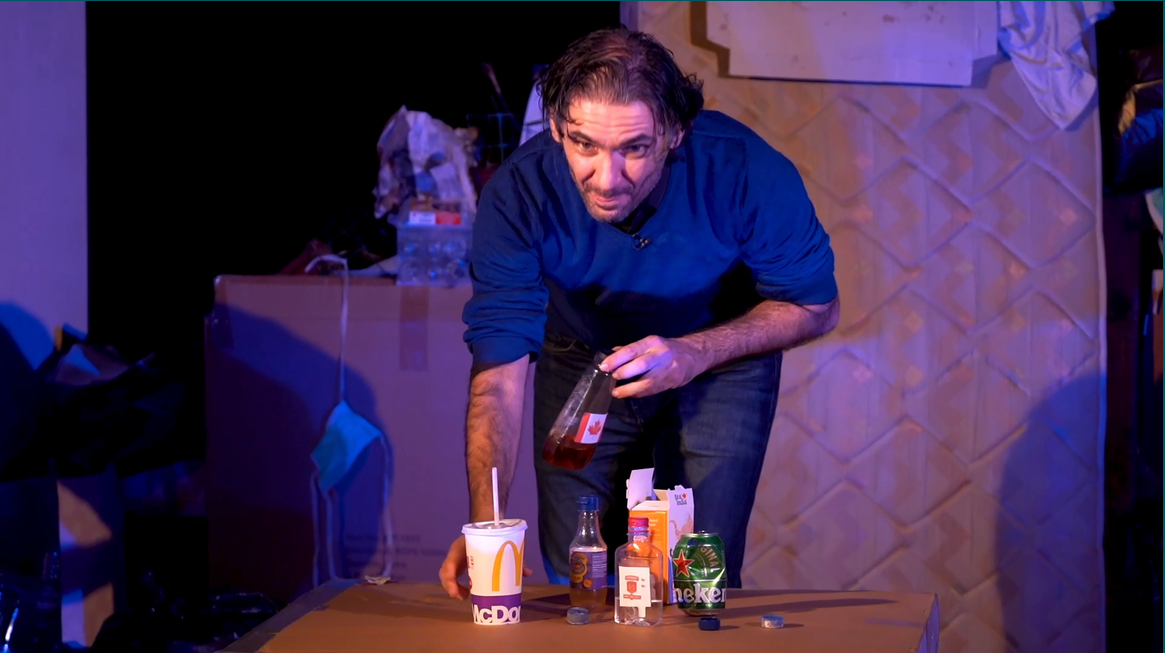 "Your AI overlord bitch can't reach you here. Like I said: it’s just you and me."