The auteur who fears men more than monsters turns to a cruel carnival setting in his latest film.

Guillermo Del Toro’s latest directorial feat is the nightmarish noir Nightmare Alley. A film that sets divination against science, and how deceit can be the death of man.

The plot melts into the classic story of Icarus flying too close to the sun. The ambitious grafter Stanton Carlisle (Bradley Cooper) slithers his way into a carnival job and moves his way up the workplace ladder. However, there is an impending sense of doom. Something that Carlisle actively avoids acknowledging, despite the signs being written in the stars by an unfortunate tarot card.

Based on the 1946 novel of the same name by William Lindsay, Del Toro and Kim Morgan have adapted the psychological thriller into a riveting screenplay.  The film itself feels like reading a book, there is an armada of subtext and the plot is linear with one unfortunate event leading to another.

Nightmare Alley has fascinating characters accompanying a star-studded cast, with Rooney Mara (as Molly) and Toni Collette (as tarot-reading Zeena). Given the focused pacing of the film, especially as an adapted screenplay from a novel, it is somewhat disappointing that characters like Molly and Zeena were not explored further.

The film is split into two parts, identifiable by the shift in setting – the carnival, and the city. In the carnival section, the set design is brooding and spooky with foetuses suspended in glass jars and a cruel cramped prison for the ‘man or beast?’ geek who gruesomely eats live chickens for audience entertainment. Through Tamara Deverell’s work as production designer, the setting nods to a bustling carnival culture that borders on both colourful and creepy. It is a feast for the eyes and senses as Carlisle navigates his new life at the carnival.

Audience members become carnival flaneurs toured around by the frightening acting of Willem Dafoe as Clem Hoately, the ringmaster and barbaric greatest showman, pulling all the carnival’s strings. It is to no surprise that Willem Dafoe is enthralling as Clem Hoately, especially following his repertoire of bonkers performances like in The Lighthouse (2019).

In the second half of the film, the shift in the setting is marked with the introduction of clutch psychiatrist Dr Lilith Ritter (Cate Blanchett). The film takes a more clinical tone, which makes the brutality of it all the more cut-throat. The interaction between Carlisle and Ritter is electric, especially when they probe deeper into each other’s brains.

Overall, Nightmare Alley is a coin with two opposing sides. Heads, the immersive carnival experience. Tails, the psychoanalytical shift to a city. With a story so rich, it might have been better suited to an adapted TV series – and with such a spectacular cast, that might have allowed their characters to fully unleash into the bleak and haunting reality of Nightmare Alley. 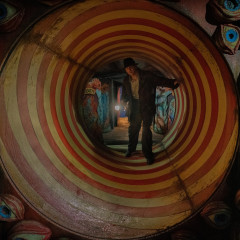 The auteur who fears men more than monsters turns to a cruel carnival setting in his latest film.