Hundreds of sexual misconduct allegations have been made against police officers across the UK within a five-year period. Figures gained via the Freedom of Information Act from 31 police forces show at least 750 allegations made between 2016 and 2020, mostly against male officers.

Of the full 750 allegations, only 35 are registered as having resulted in dismissal of the offending officer. In addition to those 35, the data also shows that in at least seven cases the officer was listed as either resigned or dismissed, and in six other cases the officer would have been dismissed had they not already resigned. Not all forces adequately detailed the sanctions taken in response to these allegations.

The data does not show which complaints were historic allegations or whether the officers were on duty at the time of the incidents. The information came from 31 forces, however there are a total of 43 police forces across Wales and England, not including Police Scotland and the British Transport Police.

Separate data that is publicly available shows that the Metropolitan Police have registered at least 500 claims of sexual offences against officers and staff in the same five-year period. The Met has faced particular scrutiny since the arrest of its officer Wayne Couzens, who was sentenced for the murder and rape of Sarah Everard, and was involved in a group chat with an alleged six other officers sharing misogynistic messages. The officers allegedly involved in the group chat include several Met officers who are currently being investigated by the Independent Office for Police Conduct (IOPC).

Since Couzens’ sentencing, at least a third of the police forces in England and Wales have referred 27 sexual assault and harassment allegations against their officers to a police watchdog. Both this data and the reports of the 750 sexual misconduct allegations being brought to the public eye follows Priti Patel’s announcement of an independent review of the Metropolitan Police following Couzens' actions. The review has been criticised by campaigners and Labour party members as “a sticking plaster solution” that will not effectively interrogate the issue of violence against women.

Denzi Ugur, deputy director of the End Violence Against Women Coalition, said: "We need to see a radical overhaul of how the police respond to violence against women - especially within their own ranks […] This means greater accountability and urgent, co-ordinated and strategic action to address violence against women […] Ultimately, we need to address these widespread institutional failings before we can even begin to address women's confidence in the police."

Claire Bassett, deputy director general of the IOPC, has praised those who have come forward with allegations, saying, “It takes incredible strength and courage to report any sexual offence but it’s even harder when the alleged perpetrator is a police officer […] Those who do disregard the oath they took to protect and serve can expect the criminal justice system to treat them no differently from any other criminal.”

She has said that anyone who previously reported an officer for sexual misconduct or abuse of power but feels their complaint has not been properly heard or dealt with can and should register a complaint with the IOPC. 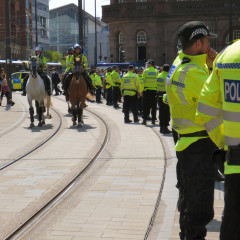 Hundreds of sexual misconduct allegations made against police officers