Over 60 artists have performed at the Global Citizen festival, which is based out of multiple cities across the world, including Paris, New York, London, and Seoul. The concerts were attended by tens of thousands of people, with millions watching online through live streams. The event started on Saturday, where Elton John kicked off the festival in front of the Eiffel Tower in Paris.

The show is coined as being one of the biggest-ever international charity events, and was organised by Global Citizen, a charity who are attempting to help end worldwide extreme poverty by the end of 2030. The event was not created to generate money for the charity, rather to get influential people to participate, as evidence for world leaders that the world wants to see action regarding the issues in question.

Global Citizen said in a statement: “Across six continents, artists will help rally citizens in demanding that governments, major corporations and philanthropists work together to defend the planet and defeat poverty”. Goals of the festival include putting pressure on international governments to plant one billion trees worldwide, delivering one billion vaccines to the poorest countries, and donating 41 million meals to those at risk of extreme famine.

Performers at the festival included Billie Eilish, Black Eyed Peas, Stormzy, Stevie Wonder, Coldplay, Jennifer Lopez, Lizzo, and Ed Sheeran, to name but a few.  Prince Harry and Meghan Markle also spoke at the event, calling for the Covid vaccine to be seen as “a basic human right”. The Duke of Sussex said, “The way you're born should not dictate your ability to survive”. Cyndi Lauper also performed, dedicating a rendition of Girls Just Want To Have Fun to Afghan women.

Funding announcements were announced in between sets, with USAID Administrator Samantha Power stating that the US would contribute $295 million (£215m). She said the money was “to stave off famine and extreme hunger, confront gender-based violence and address the urgent humanitarian needs the Covid-19 pandemic is leaving in its wake."

President Emmanuel Macron of France said that he would double the amount of vaccine injections that his country will send to those in need. Large companies like Lego, Cisco, and Verizon also promised donations.

Tickets to the performances were free, and members of the Global Citizen app who had shared petitions on social media were randomly selected to attend. The organisation has also hosted charitable events like Vax Live: The Concert to Reunite the World, which took place in Los Angeles earlier on this year, which brought together musicians, actors, world leaders, and celebrities in a call for global vaccination. 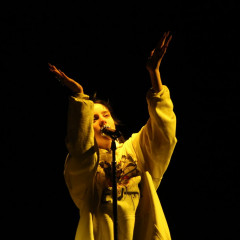