The Treasury has proposed rules regarding more transparency from financial firms and institutions outlining how they plan to reach net-zero, but the rules are not considered mandatory.

Financial firms and institutions have been told at COP26 that they need to set out detailed public plans for how they intend on facing the climate crisis by 2023, following the proposed aim to reach net-zero by 2050. An expert panel will set standards for the plans, however the commitments made by firms will not be considered mandatory, and green organisations have said that not enough is being enforced.

Net-zero is a term that is used for when a business manages to balance the amount of carbon emissions they are producing with the amount that it is removing from our atmosphere. The leaders of firms and stakeholders have been given the responsibility of deciding how their businesses will adapt to the changes, and how they plan to decarbonise emissions that they finance.

Today at COP26, UK Chancellor Rishi Sunak has made statements about how he intends to make the UK the first net-zero financial centre. He addressed an audience consisting of finance ministers, bank governors and heads of financial institutions. Sunak said that 450 firms who control 40% of global financial assets, amounting to $130 trillion (£95 trillion) have now agreed to help limit global warming to only 1.5C above pre-industrial levels.

David Barmes, a senior economist at campaign group Positive Money, has said that although the move is positive, the firms will still be funding environmentally harmful projects. He stated that "we need public institutions rather than bank chief executives to lead the way in setting standards and delivering green investment.”

Founder and executive chair of Carbon Tracker Initiative, Mark Campanale has said: "None of the financial assets announced are currently aligned with net-zero and no group of companies can say they are meeting the Paris target by continuing to invest in fossil fuels, so that needs to change considerably before London can be lauded as the world's first net-zero financial centre and a model for the world." Shaun Spiers, the executive director of Green Alliance, an environmental research group, has said: “Private sector investment is vital, but it will be much easier to achieve on the back of serious investment by the chancellor."

With the new Treasury rules, companies who have shares listed in the London Stock Exchange will have to produce their own net-zero transition plans. A new task force will be created by the government, made up of industry leaders, regulators, academics and civil society groups, in an attempt to combat “greenwashing”, where green initiatives are used more as a marketing ploy than anything substantial.

Although plans will need to be published, the government has said that "the aim is to increase transparency and accountability", and that the UK was not "making firm-level net-zero commitments mandatory".

But why not? Why not make the pledges mandatory and assessed? Surely the non-enforcement of these promises allows financial organisations to simply fabricate the plans that they give, in line with the “greenwashing” issues that have already been highlighted. Although a positive step forward, there seems to be too much vaguity to the statements. Hopefully more concrete plans will be announced later on today, but optimism is waning. If the UK truly wants to become totally net-zero by 2050, these are issues that need to be addressed in a more forceful way.

Header Image Credit: "The Big Four" by Mikepaws is licensed under CC BY-NC 2.0 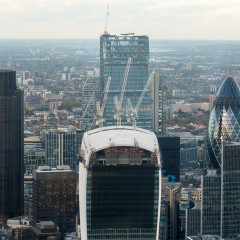 The Treasury has proposed rules regarding more transparency from financial firms and institutions outlining how they plan to reach net-zero, but the rules are not considered mandatory.