Who doesn’t love watching a movie on the big screen? Drink in hand. The sound of rustling popcorn. The air of excitement just before the film begins. What’s not to love!

Cinemas have been around for decades. The first commercial cinema was reportedly at the Grand Café in Paris, all the way back in 1895. Since then, cinemas have improved, but the premise has remained the same: it’s a chance for people to shut the rest of the world off, and totally commit themselves to a story. No distractions. Pure enjoyment.

But as impressive as they may be, cinemas are seriously under threat. With more people choosing streaming services over the big screen, such as Netflix and Amazon Prime, the future of cinema does look a little worrying. Recent releases like Mulan weren’t even shown in cinemas at all, and went straight to Disney+ instead.

Throw a pandemic into the mix and it’s safe to say cinemas have been really, really suffering.

But now that they’re able to reopen again, what do they need to do to ensure their survival? How must they adapt to today’s world?

One way is to make them much more sustainable, with a much greener mind-set.

While it’s absolutely paramount for all businesses – big and small – to be thinking greener, it’s arguably even more important for cinemas to do so because, in all honesty, they need to become more self-sufficient, and save as much money as they can, if they are going to survive.

A great way to save the planet and to save money is by cutting down waste. Now, between you and me, I’ll let you in on a little secret: I used to work at a cinema. In between my studies and social life, I’d spend evenings serving sweet and salty popcorn, directing people to their reclining seats, and checking that no kids had snuck into an 18-certificate movie.

Despite this being years ago, something about the job really stuck with me. I can still remember how shocked I was at the amount of waste our customers would leave behind. Tickets and receipts thrown on the floor. Pick-and-mix left completely untouched. Discarded drinks, not even opened, and only purchased as part of some meal deal.

Of course, this doesn’t apply to everyone. But nevertheless, waste is a big issue that can potentially make a huge difference to the sustainability of cinemas.

I went to watch a movie at my local Vue cinema recently, and they encouraged their customers to leave all of their rubbish on their seat once the film was over. Leave your rubbish on the seats – why not put it in the bin? I thought.

This comes down to the fact that lots of people don’t put their rubbish in the correct bin. Food waste and fizzy drinks end up in recycling bins which contaminates the whole lot. So, in response, some cinemas are advising their customers to leave their rubbish behind and just let the staff sort it out properly. It makes sense, but it’s sad that it’s come to this. We should all be prepared to take some responsibility for the purchases we make, and the waste we produce.

On the other hand, we can look at it from another perspective. Maybe the suppliers should make more of their products recyclable in the first place.

Changes are happening, slowly but surely. For example, Coca-Cola made the change to SmartPAK cartridges, which have a lower carbon footprint than traditional syrup packaging. Meanwhile, many cinemas have stopped using plastic straws, and incorporate much more cardboard into their packaging. That might not seem like a big deal, but when you remember there’s over 800 cinemas in the UK alone, with some seeing hundreds of customers a day, these small changes suddenly have a much bigger impact.

Another simple way to cut down on waste is by switching from paper tickets to e-tickets. This is certainly becoming the norm at your average cinema, concert, and other events. And with good reason – it’s said that in the West End, if every ticket was a physical paper one, this would equate to over 30 tonnes of paper every year. That’s a lot of trees.

When it comes to new cinemas, it’s important that they head into business with a sustainable mind-set. And some are doing a great job at this.

For example, Depot cinema, which is located in Lewes, East Sussex, was built with the mission to be as self-sufficient and eco-friendly as possible. It’s powered with its own Ground Source Heat Pump, which acts as a geothermal heating and cooling system. It has automated taps to minimise water waste. And the surrounding area (including the roof) is abundant with trees, flowers, and local wildlife, which takes in carbon and stops the cinema becoming an eyesore to neighbours. They’re certainly paving the way for sustainability in cinema – and you can even read their tips for making your own business greener too. How nice, right?

Cinemas like Depot demonstrate that eco-friendly cinemas are very possible – it’s just a matter of getting more people on board.

Maybe we’ll get there one day. We’ll see. 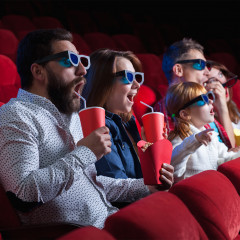