We’ve all been there: sitting in the driver’s seat at a red traffic light, eagerly waiting for it to change. The light switches to green. You’re ready to go. You’re just starting to lift the clutch. But the car in front isn’t budging. They’ve stalled, and they look a little flustered. It’s a learner driver. The car behind has started beeping. Now the lights have gone red again. How annoying.

Any regular driver will be familiar with this scenario. Particularly now that lockdown is easing and driving schools are up and running again, there seem to be learners everywhere.

In July 2021, DVLA stated that over 9 million people in the UK are using a provisional driver’s license. This doesn’t mean there’s this many learners on the road at one time, but whatever the true figure may be, it’s pretty high.

It can be awfully tedious being stuck behind a learner trundling along at some painful speed. But we have to remember that we’ve all been there ourselves. Yes, some people pick up driving much easier than others. No, not all of us are the same. But even the very best drivers out there knew nothing about cars at one point. None of us come out of the womb with the talent of Lewis Hamilton.

And actually, while learners are prone to making silly mistakes, they’re allowed to, to a point at least. As long as they haven’t harmed anyone, getting the wrong gear or taking a bit longer to turn right at a junction isn’t really the end of the world. In all honesty, a learner is probably only going to get better at driving, whereas there’s plenty of idiots already on the road who should simply know better.

77% of UK driving instructors say they face regular abuse and intimidation from other road users while teaching lessons. Nearly a third of these instructors experience this abuse on a daily basis. And practically half (49%) have experienced verbal abuse. So this isn’t a one-off event that a few unlucky drivers experience. It’s the norm.

Getting impatient and frustrated is a common human reaction. We all do it. But actually, intimidating a learner driver isn’t just rude: it’s unhelpful. Instead of yelling at them to go faster, leaving them alone and giving them some space may actually be the best thing you can do. Putting more stress on them, making them frazzled, and interfering with their concentration is unlikely to make them a more confident, smoother driver. And if they’ve made a mistake, chances are they’re aware of it whether you shout at them or not.

85% of learner drivers say they make more mistakes when they’re experiencing learner abuse. 22% have cried as a result. And 8% have become too scared to continue driving.

Don’t get me wrong, I don’t enjoy being stuck behind slow drivers. But when it comes to learners, I understand. I may have passed my driving test first time, and I may be a comfortable driver for the most part, but I still experienced nerves while learning. I made all the classic mistakes: missing my chance to go at a roundabout or slipping into fourth gear instead of second. I had cars pull out in front of me because, God forbid, they’d have to drive behind a learner for less than a mile, and I had the odd person beep or yell in my direction. It’s never fun.

But road rage isn’t just discouraging - it’s dangerous too. It encourages impatient drivers to overtake in unsafe places or tailgate a car that is probably more likely to stop unexpectedly compared to other drivers.

1.5% of learner drivers say they have been involved in an accident due to road rage aimed at them. That’s over 1 in 100 learner drivers - and there are potentially millions of them out there.

I wouldn’t say learner abuse is exclusive to other drivers. I can admit that my driving instructor gave me more stick than any other driver ever did. A bit of passionate encouragement never hurt anyone. Even a loud “STOP!!!” would be understandable in some scenarios. But my instructor’s ongoing passive-aggressive remarks were pretty uncalled for. He spent most of my lessons chatting to his mates on his mobile phone, complaining about his wife, or making misogynistic comments. At least this gave me enough motivation to pass my driving test - I was glad I wouldn’t have to see him again.

Of course, not every instructor is like this. Not even the majority. But don’t do what I did. Don’t put up with somebody who thinks that just because you’re a young, clueless learner, you can be talked down to. Find somebody who encourages you and tells you how to improve rather than jumping at the chance to shout at you. Find somebody with patience and empathy.

It’s funny because since I’ve passed my test, I wouldn’t say my driving is hugely different. I still drive the same car I learned in. I still drive the same routes, most of the time. But people don’t beep at me. People don’t tailgate me on my route to work. In all honesty, I think a lot of learner abuse has little to do with driving ability. Often, I think it’s just a matter of somebody seeing an L plate and feeling inclined to develop some road rage. ‘Jeez, somebody who’s going to be driving the speed limit’, they think.

I can see both sides of the argument. Of course, learner drivers can make some pretty dire driving decisions. But I’ve seen plenty of experienced drivers mess things up on the road too. And while learners are hardly going to be the best drivers out there, neither are you if you can’t be decent or act safely around them. 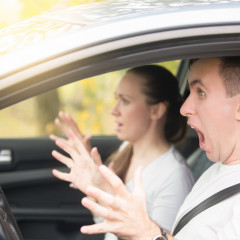