First off, it's worth saying that the polar bear story is more complicated than first appears. They share very recent ancestry with brown bears (as recent as dogs and wild wolves), and similarly, are able to hybridise to produce fertile offspring. So, what we can expect as the ice caps disappear is a kind of extinction by sex. As temperatures rise, less Polar Bears will be able to forage for food and survive to breed. Over time, those few that do survive will be more likely to interbreed with still healthy populations of Brown Bear. Gradually, more brown bear DNA will feature than polar bear, but it won't be lost forever. The process would be similar to how modern humans retain some DNA from extinct Neanderthals.

That said, it's not all sunshine and roses. As for climatic effects, we're starting to see some already, with wildfires in many cases simply exacerbating a problem already started by people – namely deforestation in Australia, Europe and more recently, the Americas. This is leading to devastating losses in biodiversity, most notably in the tropics. Anybody else noticing how every year they keep saying 'hottest since records began'? It's becoming a regular feature.

This warming is magnified in polar regions, because a difference of a few degrees can mean the difference between solid ground and soup. Britain can't just expect sunny summers though, our wildlife is already reacting.

Warmer temperatures are driving species further north, and forcing cold-loving species to climb higher altitudes. However, they can only climb so high before they run out of ground, and plant species aren't often fast enough to respond to these changes. This has prompted some groups to advocate the translocation of plant species ahead of schedule, to ensure their survival.

As our year starts earlier and earlier, insects are active sooner than usual, leading some birds to miss out on the vital glut of caterpillars to feed their young. Resident species are likely to adapt faster to these changes, but migrants will likely face increasingly harder years as they struggle to keep pace. Some migrants, like Blackcap, have already decided to become year round residents, taking advantage of 'urban heat islands' caused by the waste heat human residences give off.

This heat affects our waters too, and we are seeing dramatic shifts in the range of marine species, marching North to find suitable temperatures. This spells bad news for fisheries, as colder waters tend to be richer in nutrients.

However, fish and chips pale in comparison to the threat of a shift in our Gulf Stream, the warm current which sweeps up from the Caribbean to keep us from the plummeting temperatures we'd otherwise experience, like our latitudinal twin Labrador in Canada, where it's cold enough to freeze seawater. The Gulf Stream loses water through evaporation as it travels, which both cools the water and increases its salinity. These have the effect of increasing its density, which draws the current along the ocean floor until it reaches warmer waters again. A drastic increase in colder melt water from the Arctic could tip the scales by reducing the salinity of the stream, breaking this cycle. Without this process (known as the Thermohaline Cycle) temperatures here will plummet.

Hibernation is a tricky time, leading many species such as hedgehogs vulnerable. As our warmer seasons drag on, they are forced to bed themselves later and later, leaving them less fat reserves to live on in the winter. Hotter springs similarly tend to wake them before there's enough food around to sustain them.

There's also the runaway problems to think about. As our colder habitats melt, they become darker, absorbing more of the Sun's heat, thus speeding up the process. Then there's the threat of previously locked carbon in lake sediments, permafrost, peat, soil and ice that would simply belch into the atmosphere without the water to hold it back. These include such greenhouse gases as methane, which are 84 times more potent than carbon dioxide.

Invasive species are another hidden danger. As Britons, we have flooded this once unique set of islands with hordes of non-native species for food, fun or simply by accident. Dry Rot, scourge of builders the world over, began life as an obscure fungus eking out life in the Himalayas. As they warm, many species which historically haven't been able to make the jump from garden to the wild will get their chance. Cornwall is a good place to look, which currently has wild Giant Rhubarb, Tree Echium and other tropical oddities. Animals aren't exempt either, the county has a healthy wild population of stick insects and False Widow spiders.

Terrapins, unethically released into the wild by lazy pet owners, have so far been kept in check by a limited ability to breed (due to our comparatively mild summers). However, as our summers get hotter, we can expect the locally devastating effects on wildlife (birds, fish, invertebrates) to spread unchecked. This goes too for a host of pest insect species. We are already seeing more sustained attacks on our tree species (mostly Larch and Horse Chestnut) due to milder winters.

As our atmosphere becomes thicker with carbon dioxide, much of this will dissolve into our waters to form carbonic acid. This acid corrodes calcium carbonate, a key constituent in seashells and corals. This means the poor beasts will dissolve, and release even more carbon dioxide as a result.

Earth experienced a similar event during its most traumatic extinction event, the Permian extinction. Oceanic algae, the great unsung heroes of oxygenating planet Earth, often have internalised structures made of calcium carbonate. These microscopic structures, 'coccoliths', are what form chalk. Without such algae in existence, the planet saw an unprecedented drop in oxygen, causing much of it's terrestrial life to suffocate. Colloquially, it's known as 'The Great Dying' during which 96% of marine species and 70% of terrestrial species became extinct. 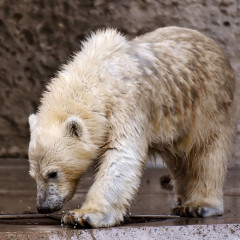