Folk/Alternative singer songwriter Cat Eliza T’s music is self-described as mainly being “happy with sad lyrics”, but when being brought up on Bluegrass this is hardly a surprise.

Cat is a multi-instrumentalist, playing guitar, ukulele and viola, and has a voice that was described by  St Paul’s Lifestyle as giving Streisand a run for her money.

She is currently working on a new EP (which will include an intriguing TedX inspired mosquito song) to follow her debut EP back in 2018 entitled ‘I Should Wait Around’.

I spoke to the Southampton based musician to get an insight into where her music career began and what inspires her lyricism.

When did you start writing music?

The first song I ever wrote, I was 13 but it was awful. I didn’t write music again ‘till I was in uni. I kept performing cover songs and was forgetting the words because they weren’t mine, but then other people knew them… Like, Bob Dylan is really famous so if you fluff one of his songs everyone knows it. Then I thought, why not try writing something, then if I mess up no one will know. It kind of snowballed from there.

Did you perform at uni?

I did drama and theatre at uni, I wanted to be an actor but music took over, as I wasn’t enjoying the roles I was getting auditions for. I wanted to be in control more and start performing what I want rather than someone giving me a script.

Do you have a typical theme/inspiration for your music?

I have to stop myself from using the word ‘try’ in all of my song lyrics. I read it and i'm like ‘why am I always trying?’. There’s a lot to do with water and flying, its things to do with nature and escaping and escapism. I grew up in the woods, my childhood home backed onto a beautiful forest with pine trees, and we had a fox den at the end of the garden. I spent most of my time just running around the woods.

Other than that, it’s a bit all over the place. On a deeper level, I’m quite bleak. Someone once said that my music was very sardonic and I thought that was both a compliment and not. But I always try and make things funny.

Do you have any surprising music influences?

I like classical music. Spoken word as opposed to rap I like, I find rap difficult to connect to. I also like punk, I like anything that is really strong or angry. ‘Give Me It’ by The Cure is great because it is so strong. There’s this thing where emotionally humans try and balance. So if you look at something cute, you kinda wanna’ squish it. That’s your body trying to balance you so you don’t go bonkers too far in one emotional direction. So when I listen to music that is really angry I’m also really happy cos I’m like ‘yes this is brilliant’.

What instruments do you play?

Quite a few, if it’s got strings, I can probably do it. The first instrument I learnt was viola when I was about 7, and the viola isn’t too far away from a violin. I can also play the appalachian dulcimer, which is something you play in your lap. I also play guitar, ukulele, bass guitar and the penny whistle. A penny whistle is kind of like a recorder, it’s an Irish thing. I used to play piano, and be able to sight read written music, but I got rusty.

Do you have a favourite instrument to play?

I think I like singing most, it comes most naturally to me. I think it’s just genetics. I’m just lucky. I think everyone can get better. With a lot of people I used to teach it was just confidence, once they had that they were making a much rounder, more pleasant sound. I guess also guitar because it’s quite comforting to have that.

What’s been the most enjoyable moment of your music career?

I went to Bulgaria, twice. The first time I went was just this wonderful experience and there was about 10 of us, we were all about the same age (in our early twenties). We were all booked to go out there and rotate at different venues around the city and perform. I made friends with radio presenters, TV hosts.

Bulgaria is an amazing place and they are so friendly there. It’s an interesting place in terms of everything; their culture, their history, their architecture.

What advice would you give to other musicians that are looking at starting out?

Go to open mics. I didn’t know anyone when I started out, and I was really lonely when I moved back to Southampton. Go to every open mic you can think of, you might feel a bit on edge for a while but over time you’ll start making friends with people. Most of my friends now, I didn’t meet them at school or at uni, I met them at open mics and within the music scene. Once you make those connections, your friends will say ‘I’ve got a gig, I like your stuff, why don’t you play first support?’ and it grows from there. Go to things like Sofar Sounds events. That’s how I started out as well. Don’t be scared to go to stuff- you’re not gonna get paid, hands down. You’ll be very lucky to get paid if you are just starting out. You have to work to get a name for yourself and a recognition. When I started out I didn’t get paid and now I can charge a certain amount per set, and also a pint please!

I heard you grew up on Bluegrass music, tell me about that.

Yeah, my dad is a bluegrass musician and my mum is classical pianist. My brother is now a doctor of music. I didn’t really have a choice to be in music. Both in terms of my genetic makeup, and every day of my life I have woken up to the sound of an instrument being played. It’s never quiet.

I can imagine that’s quite nice but maybe not if you want some peace and quiet.

Yeah, not if ya Dad is playing a banjo! But yeah it’s a really fun genre of music. It’s not country, and it’s not folk, its Americana and it tends to be gut wrenching lyrics with a fun rhythm to it. My music has gone a bit gloomy punk recently but I think that is just The Cure coming through.

It’s interesting to hear your music change depending on what you are listening to?

Yeah, like I’ve got some stuff that is really prog rock as I was listening to a lot of Yes, so my first EP is really folky, really light, but the one I’m working on now is not, it’s really dark and completely different. It’s good to see there has been a shift. I wouldn’t want to make an EP that sounded the same as the one before it. David Bowie. Bob Dylan. The Beatles – They all re-invented themselves multiple times. I like that idea and I want to try and do that.

This interview was lightly edited for clarity and breadth. 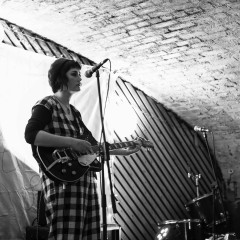