My experience of playing guitar has been great as it’s given me a new way to be creative and use spare time productively. It’s also granted me another method of creating music alongside my hobby of singing. It was interesting to see how songs that I love listening to are comprised, in regards to what chords, what strumming pattern and what keys are used. As well as being able to hear what my own rendition comes out like!

I enjoy playing a range of different songs, some of the bigger artists include Fleetwood Mac, Nirvana and The Beatles. I mainly play these due to the fact that I listen to their music regularly.

In terms of platforms that helped me learn, Marty Schwartz’ videos on YouTube were useful, his channel can be found via the below video:

His videos were helpful when wanting to learn a specific song as he goes slowly through the chords, the hand positions needed to perform them, the changes between the chords and demonstrates the strumming pattern - which is essential to getting a particular song to sound right and like the original.

As I started to come across new practices within the guitar sphere, such as bar chords and the use of a capo, I researched how these processes worked on google and used a variety of different websites that came up to get clarification. I made notes on what I felt was relevant and helpful and used this once I’d got to the stage where I could progress with these forward.

Putting it all together

These steps should leave you equipped with a foundation to develop upon and with enough time dedicated, the songs you can play will become easier to perform. Guitar chord books are useful as they contain diagrams of where to place your fingers on the fret. Most importantly though, keep practicing as guitar can be muscle memory! 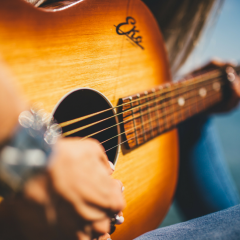 How to learn to play the guitar