Voice MagBlogsMy Year in the Sun

I have always been dead set on taking a gap year and travelling before going to university. My dad took one, and ever since he told me about his travels years ago, I’ve been sure that I wanted to do the same. Even when I went into sixth form and had to start looking at universities and thinking about what I wanted to do when I left school, I was still set on taking a gap year first.

One of my friends wanted to do the same, and we discussed travelling together, but she soon chose to take an Art Foundation degree instead, and so I was left with no one to travel with.

In fact, very few people in my year of over 120 considered taking a gap year - almost everybody planned to go straight to university, which baffled me somewhat. Taking a gap year was an option that was supported by my school, but never actively encouraged, and I genuinely don't think many people ever considered it as a valid option.

Personally, I’d spent 13 years in a highly academic environment, working incredibly hard, and I really wanted a break before going to university, where I’ll also work hard - and party hard, I'm sure! As well as that, I wanted to use my pre-university gap year to finish writing my first novel. I have always wanted to be an author, and have started seven novels, but never finished any of them, and I knew it would be excellent experience, even if nothing ever happened with it. Unfortunately, that’s not going so well… I’ve been very busy!

My mum wasn't keen on the idea of me travelling alone; for an 18 year old girl travelling by herself in today’s world, there are sadly a lot of dangers that my dad, travelling with another guy 30 years ago, didn't face. She asked me many times if I couldn’t just wait until after university, when I would undoubtedly have many more options of people to travel with, but after university was a really long time away. I didn't want to wait four more years to see the world.

So I started planning. I knew I wanted to do some volunteer work, and found a charity called Raleigh International that offered a programme that seemed to suit me. It included both social and environmental work, and one of their destinations was Nicaragua, which would give me the chance to practice my Spanish. I decided to apply for the full 10-week expedition, and secured my place in January 2017.

Through my school I then received the opportunity to apply for a position as a Teaching Assistant at a school in Tokyo for three months in 2018. I found out my application was successful in May 2017, and decided that the obvious destination between Nicaragua and Japan was Australia, where I had various family and friends I hoped to stay with.

In the summer of 2017 I went to STA Travel to book my flights. I’d decided to spend some time in Florida before the volunteering, as we had family friends out there who kept asking when I was going to visit! My sister and I had also planned to spend Christmas and New Year’s together - she was going to fly out to Sydney to join me during her uni holidays. A very impressive pitch from the travel agent somehow resulted in us planning a three-week holiday in LA, Fiji and Sydney instead!

So I had flights. I’d applied for - and received - a grant from my school to help pay for those flights. I had an itinerary, even if the time in Australia was only loosely organised. I had some money from babysitting and tutoring, and savings, and had fundraised for the volunteering. My mum and I did a lot of shopping for supplies, and I packed and unpacked and re-packed, and then suddenly it was 26 September 2017, and I was getting on a plane to Miami.

Now, it’s April 2018 and I’m in Tokyo. I’m already at my last stop, which I can’t believe. It has been the most incredible year; I’ve met amazing people, achieved extraordinary things, experienced my highest highs and lowest lows, and I’ve still got nearly three months to go!

I’ll be writing about each phase of my year in more detail, as well as giving some advice for travelling that I’ve learnt over the past seven months. You’ll be able to read about my two weeks with a Trump supporter (tbc), why volunteering was neither what I expected nor wanted, my Oz East Coast road trip, and some tips for being vegan in Japan. 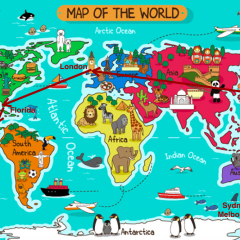 My Year in the Sun