From the pastime of the rich to the concern of the poor, from the domain of women to the task of men, sewing has recently experienced a different kind of revival altogether.

In the 16th century sewing was the pastime of the very rich, and particularly a woman's craft. The ladies of the aristocracy would spend hours embroidering garments in the daylight hours, sewing becoming entwined with rituals about womanhood, birth and gossiping. It became a marker of status that these ladies had the time to spend on this hobby. During the renaissance, sewing was usually done by women embroidering in the home rather than professional male embroiderers. During the 17th century, sewing was seen as a marker of femininity in young women, so gained distinct gendered connotations.

In the 18th century, sewing was an idealistic construct, part of an aristocratic lifestyle, a women's domain to partake in embroidery as a pursuit of leisure. In the 19th century this equation with women and embroidery became solidified as an ideal. However in reality sewing in the 18th century was also part of the man's domain, becoming more practical rather than a mere hobby. Indeed, it was the man who would tailor and alter clothing away from the domestic sphere. Tailoring was distinctly part of the sewing domain of men.

During the Second World War the mantra 'make do and mend' inspired ordinary people to make the most of what they had at home, using sewing skills to fix and amend garments to make them wearable once more. Home sewing was the women's area whilst many of the men went away to fight. Sewing once more became about practicalities, utilising limited materials to produce wearable garments.

After the war into the 1960s and 70s, the rise of consumerism and fashion available on the high street to the masses seemed on the surface to make home sewing redundant and an unfashionable cheaper alternative. In reality, many people continued to sew, and it became a hobby that many people enjoyed and passed down through the generations.

Today sewing is experiencing a revival. Many young people are learning to sew, being able to create unique and individual clothing, homeware and accessories. In a world of mass globalisation, many people sew to create something different and personal, to escape the consumer world and make something individual to themselves. It's also used as a way of self-expression, and there are a new generation of professional designer-makers.

With the rise of programmes like The Great British Sewing Bee, sewing has become relevant and interesting to get involved with, a pastime of all genders. Sewing is no longer a necessity or a way to get by or indeed only the pastime of the rich: in fact it is often more expensive to make something from scratch than it is to buy it from high street shops. With the rise of courses, degrees, haberdasheries and fairs, sewing is as relevant and important today as it ever was in the past. If anything, sewing has become much more diverse. 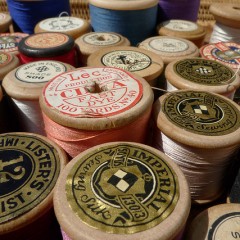 Is sewing as relevant today as it ever was?

From the pastime of the rich to the concern of the poor, from the domain of women to the task of men, sewing has recently experienced a different kind of revival altogether.