Voice MagReviewsTHE SHOW MUST GO ON!…

The last year or so has certainly not been kind to individuals working in the arts, with many facing sudden unemployment and financial difficulties. However, in an effort to help support those working in theatre, many people around the world (myself included) spent their time during the pandemic watching a fantabulous array of dazzling performances, movie musicals and filmed stage spectaculars for free. This was thanks to the excellent The Shows Must Go On campaign, an initiative launched to raise money by the Theatre Support Fund.

The Theatre Support Fund was set up in April 2020 by theatre industry workers Chris Marcus and Damien Stanton, who ‘wanted to form an initiative to help individual workers who are no longer working due to the Coronavirus pandemic.’

The Shows Must Go On campaign treated audiences around the globe to a wide range of weekly theatre performances, broadcast to their YouTube channel, with each viewable content available for a limited time. From The Phantom of The Opera to The Wiz, these filmed stage shows were shared with people at home, to make sure the arts remained prominent during such difficult times, and to most importantly raise much-needed vital funds for theatre.

The campaign was supported by donations and merchandise sales, with designs created by Marcus and Stanton. Mugs, t-shirts and much more were available, and endorsed by a whole host of famous faces and acting alumni. (And are still available to purchase if you’re interested). Thanks to the generosity of viewers and supporters, the charity effort has raised a total of over £800,000 to date, with all profits from merchandise sold going to Acting for Others, Fleabag Support Fund and the NHS Covid-19 Urgent Appeal, to help keep British theatre alive and kicking.

Over a year since this charitable initiative was first launched, with the long-awaited apparent easing of pandemic restrictions and reopening of arts spaces, theatres and live performances finally here, the Theatre Support Fund and the National Theatre Live  have organised and live-streamed a phenomenal musical extravaganza to both celebrate the charitable achievements of The Shows Must Go On initiative and raise additional donations. The one-off event raised money for the Theatre Support Fund and all profits went to supporting theatre charities, Acting For Others and The Fleabag Support Fund.

This ambitious menagerie of musical medleys happened in front of a live audience at the Palace Theatre in London on Sunday evening, but as the excited theatre goers took their seats within the stalls and waited for the curtain to rise, so too did 40,000 people watching from home, as the performance was streamed live around the world. As was announced by Sadiq Khan, mayor of London who also delivered an unexpected speech, the live event managed to reach their target and raise a fantastic total of £1,000,000 for theatre!

The two-and-a-half hour celebration was presented by show-tune thespians Bonnie Langford and Trevor Dion Nicholas, who also opened the transmission by performing an original song written especially for the cause by Stiles & Drewe titled ‘ The Show Must Go On’. Similarly, the exhilarating evening ended with all the nights’ performers coming together to sing Queen’s ‘The Show Must Go On’ from the much-loved West End smash, We Will Rock You. This was the perfect note to end the theatrical fundraiser, bringing energy back to the room following the break from performances caused by the mayor’s speech and announcement of the fund’s achievements.

The evening served as the perfect celebration of theatre and highlighted the importance of the arts across the world, whilst also raising funds to help get theatre back on track. It started as it meant to go on, with energetic, emotional and exciting performances throughout the evening – showcasing the wide breadth of talent of recent graduates performing vocals in a choir alongside famous faces across the industry. The broadcast also featured those theatre workers who operate behind the scenes or with roles away from the stage, showcasing the variety of individual professional work that exists within the industry.

You can donate to the cause here. 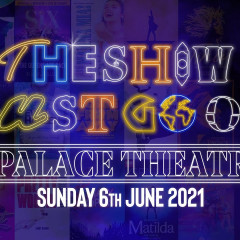 THE SHOW MUST GO ON! Live At The Palace Theatre