Ranking my top 10 performances of the weekend

Every time the solstice weekend rolls around, I feel myself lamenting the fact that I’m not surrounded by the fields of Worthy Farm – and resenting those who are. Glastonbury holds a reputation for being the most magical and unique place on the planet, and this is something I am yet to confirm for myself.

I have very fond memories of Glastonbury 2010, dancing around the living room to Pet Shop Boys’ iconic set with my parents. Not only was this an introduction to the beauty of Glastonbury, but to the wondrous world of 80s synthpop. The influence still lives on within me.

So, this year, as the fields filled with eager fans happy to return after a two-year hiatus, I sat at home with an ice pack on my wisdom tooth, poured myself a bit of rum and opened up iPlayer to create the best illusion possible. Here are my highlights* of that solitary weekend.

*Disclaimer: I’m purposely excluding Paul McCartney because, well, it’s literally Paul McCartney. The man is 80 years of age, and yet still nothing comes close to a literal Beatle.

Dry Cleaning put on a show with an intensity that’s surprisingly difficult to describe. Very effacing and no-nonsense, with frontwoman Florence Shaw uttering lyrics that hold a  cut-throat bluntness rarely displayed in music at the moment. Quirky and arty, the South London four-piece are certainly on the rise, and one to watch out for whilst they’re still playing smaller venues. Glasto was just a step up the ladder for them, and it won’t be the last time they make an appearance.

An excellent feature from one of the more chilled Glastonbury sets of this year comes from Khruangbin, who fused psychedelia and soul to create a dreamy set that should not be missed. Taking clear inspiration from the music of the 70s, the trio breathed a modern life into a classic sound, creating a vibrant and interesting set that enthralled the audience.

Lianne La Havas provided the crowd of The Other stage with an ethereal, chilled-out set that effortlessly sent shivers down my spine. The highlight of the performance was her beautiful and celestial rendition of Radiohead’s Weird Fishes, which is the reason I grew to love her music in the first place. Her smile was infectious throughout the whole performance, and made the whole thing so much more enjoyable. I can’t recommend this set enough, and Lianne’s music in general.

Metronomy really came into their own for this set on the Other Stage. After opening on some of their newer songs, they quickly defaulted to their older material, and the crowd were all the happier for it. My mind was blown when two of my favourite tracks, Boy Racers and The End Of You Too were played back to back. They’re both incredibly driven and funky instrumental tracks that, for lack of a better phrasing, go hard. They even made an effort to craft their very own ‘Glasto Moment’ onstage, and everybody looked incredibly happy to be there. Definitely a set you should watch back if you missed it.

Noisy post-punk Brighton based band Squid really earned their spot on The Park stage this year. With long and winding tracks, their hour-long set was only comprised of eight songs in total, making them, in my opinion, one of the most unique bands around. Sonically narrative and lyrically sparse, I find their songs to be great fun to really let loose to, and enjoy the moment. This mentality was shared by the crowd too, with pits opening up and individuals going berserk in a way that felt almost cathartic even just to watch. Squid are always good fun, and it’s impressive to see the hard work that pours into their music – especially considering that the lead vocalist Ollie Judge doubles as their drummer, which just absolutely blows my mind every single time.

Despite technical difficulties midway through the set preventing any sound from being heard whatsoever, Caribou absolutely smashed their set. As a dance act, I find their setup very interesting and unique; nowadays, it’s typical for dance acts to be one person behind a DJ deck, but Caribou provides a full live band, and the difference really shows. The crowd was radiant with a sense of euphoria as every single person there was dancing and smiling, as the band generated upbeat vibes without hesitation.

Opening with staunch minor harmonies of the track In ár gCroíthe go deo, also the opening track of this year’s album Skinty Fia, Fontaines D.C. didn’t even break stride in storming the Other Stage this year. Paying homage to their Irish roots, the band played a raucous set that explored all corners of their discography, filled with an unbeatable energy throughout. Accompanied by a strings section, the performance was really enhanced by haunting instrumentals that wouldn’t necessarily be expected of a heavier rock band. Whilst the crowds were ablaze with a combination of feral energy and flares, Fontaines wasted no time in exploring the quieter tracks too, making good use of the piano for Big Shot. The entire show really excited me for what Fontaines have to offer in future.

It’s no secret that Simz is my absolute hero. I look up to her with immense gratitude and feel boundlessly empowered by her music. Her Friday headline slot on the West Holts stage was indubitably prodigious, and definitely won’t be leaving my mind any time soon. She never fails to keep an admirable sense of cool composure throughout her sets, despite how immensely hyped the crowd gets. From beginning to end, Simz didn’t miss a single beat, and cleverly utilised the interludes from her latest album Sometimes I Might Be Introvert to craft a storyline in the performance. One again, this mind-blowing performance proved that Little Simz is absolutely top of her game, and easily the best UK rapper out there.

Easily one of the most exciting and energetic sets to be broadcast over the weekend came from this enigmatic Brisbane-formed four piece. It was so good that I actually watched it back in less than 24 hours after it was streamed – and I danced harder than I can even begin to describe both times around. With several costume changes and impressive dance routines, I will forever be in awe of how the band can perform so consistently well without being totally out of breath. I may now be a little bit in love with practically every member of the band (namely their frontwoman, Janet Planet), but who can blame me after such an enticing and undeniably fun set? Wall-to-wall bangers and dance anthems that are guaranteed to live up to their name by instilling confidence in yourself no matter what it is that you’re doing. Infinitely cool and refined, Confidence Man simply never fail to impress, and I am already itching to see them again as soon as possible.

Whilst I aimed to omit headliners from this list, I absolutely had to make an exception for Kendrick. From start to finish, he played an absolutely flawless set; the choice of setlist was exciting and had the crowd absolutely roaring for the whole 80 minute duration. Following the release of his latest album Mr. Morale and the Big Steppers earlier this year, an incredibly socially-aware and politically-driven record, the whole performance felt incredibly well paced and calculated. Defying all expectations and knocking it out the park, I truly believe that this set solidified Kendrick’s place as one of the greats of our generation for those who may have been in doubt, and hopefully acted as a gateway to accessing hip hop for those less acquainted with the genre. The poignant finale saw Kendrick smattered in blood whilst wearing the crown of thorns that had adorned his head throughout the show, whilst surrounded by an entourage of contemporary dancers, reciting the phrase “they judge you, they judge christ, Godspeed for women’s rights”. Given the significant historical context of the Roe vs. Wade overturning that same weekend, I think it’s safe to say that a vast portion of the population watching that set will definitely have had chills the way that I did too. 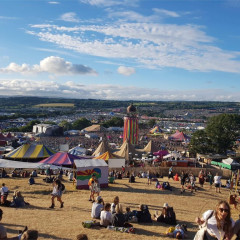 Glastonbury (at home) - The Highlights

Ranking my top 10 performances of the weekend