Since the live music and events industry reopened post-Covid, I believe I’m not alone in saying that the attitude and general etiquette of those attending has submitted to a total shift. I’ve noticed this particularly at live music events, from personal experience and the experiences of those around me.

Recently, I’ve had the misfortune of enduring the pain caused by bruised ribs for nearly four weeks. This came as a result of seeing Foals, a band known for having raucous crowds and heavy mosh pits. Now, I’m no stranger to being a part of a Foals crowd – I’ve been attending their gigs since I was only fifteen, and so with seven years of experience under my belt, I felt no hesitation in making my way down to the front for their show at Castlefield Bowl. Sufficiently merry and surrounded by friends, I thought I was ready for the show. What I wasn’t ready for, however, was the general appalling behaviour from within the crowd.

Throughout the show, I was met with elbows to the neck and shoulder blades, pinching, hair pulling, and carless shoving. This is more than just your typical moshing, it was acts of thoughtless violence that could have resulted in serious harm. During the last song of the show (which is when I suspect the rib injuries were sustained), I was dragged out of the crowd and over the barrier at the discretion of security.

Sadly, this isn’t the extent of the poor conduct at live events at the moment. As the crowd dispersed, it wasn’t difficult to notice pockets of around 30 phone cases on the floor, and people were hit with the realisation that their phones had been stolen. A similar phenomenon had been happening earlier in the year, with IDLES shows being hot-spot targets for phone theft – to the extent that venues were having to post notices warning fans of the issue.

You would think that it would stop at theft and violence, but sadly, it does not. Following on from the crush at the Manchester show, Foals fans in Leeds were met with groping, fighting and verbal abuse. Speaking to one of the victims of this behaviour, who will remain anonymous, they told of the experience: “She then started bumping into people, which you think yeah sure, she’s drunk, whatever, she’ll sober up. Then it kind of seemed more… deliberate, at which point she got very touchy-feely with everyone. We all exchanged glances as if to say ‘is it just me who finds this weird?’”. Other victims were touched inappropriately by people almost twice their age, and several people reported feeling generally uneasy, even when problematic crowd members were removed by security.

As a result of this cumulative negative crowd demeanour, several fans grouped together to create a campaign with the intention of getting a response out of the band. A statement was curated and shared around social media, stating the following:

“Foals crowds have always been a super safe space for us. A place that we can go to forget about our problems and have a great time for a few hours without a care in the world. However, recently, the tides have changed, and we’re starting to feel unsafe. There has been a massive epidemic of theft, assault and inappropriate behaviour at UK Foals shows, and it’s a problem that needs addressing.  We ask that as fans, you look out for one another in the crowds, and call out any poor behaviour. We would also appreciate it if Foals themselves could address this unacceptable behaviour at gigs, because it’s saddening to see that these are not isolated incidents; it’s repeatedly continuing to happen.”

After a while, the band did respond, putting out a statement calling for better etiquette amongst fans in an email campaign and on their website.

However, this isn’t an issue exclusive to a certain audience. Whilst theft and assault is by no means a new issue, there has definitely been an increase in this behaviour post-pandemic, almost as if two years indoors has caused people to forget their manners and act in a completely unacceptable manner.

In autumn 2021, shortly after lockdown restrictions were lifted, major cities across the UK saw an influx of cases of spiking (to put alcohol or drugs into someone's drink without their knowledge or permission) – something that has been a common problem in the public awareness for some time. However, this time, the spiking took an even scarier form, being administered to victims unknowingly via a needle. It’s something that, understandably, caused great unrest and made people feel unsafe in environments that are supposed to be fun.

It begs the question – why has this behaviour seen such a dramatic increase after lockdown? Many would argue that mental illness is responsible for this kind of behaviour, but I have to disagree. Not only does this paint an incredibly false and negative image towards those suffering with mental illness, further enforcing the stigma that those affected are working hard to erase; it also is simply untrue. A study conducted by Cambridge University press found that ‘the initial effect of lockdowns on mental health is relatively small, providing evidence of people's robust capacity for resilience’. The behaviour that I have personally experienced and have observed anecdotally through others totally violates the idea that mental illness is responsible for this kind of behaviour. As someone with mental illnesses myself, I could never even dream of behaving in the way that I have discussed here – that truly takes someone with a reckless carelessness and total lack of respect for others.

Another study, conducted by Cardiff University last year, may hold some answers, however. The study found that serious violence increased by almost a quarter when restrictions eased, with the 23% rise being the most dramatic on record. Alarmingly, within the 18-30 years age group, the figures saw a staggering 29.2% increase, which followed a drop in 2020 attributed to the closure of venues that are now seeing this kind of behaviour. The numbers of recorded violence cases also were highest on weekends, supporting this theory.

Whilst the Cardiff University study neglects to investigate the motives and reasons behind why this kind of behaviour is happening, we may be able to gain a deeper understanding of possible causes by examining the Frustration-Aggression Hypothesis (Dollard, 1939), which states that ‘when people are frustrated, they experience a drive to be aggressive towards the object of their frustration, but this is often impossible or inappropriate, so the source of their aggression is displaced on something or someone else’. This could explain why the inappropriate behaviour is being exhibited at live events, as some people may feel that the usual societal norms go out of the window whilst in a mosh pit. The Frustration-Aggression Hypothesis also explores catharsis (the relief of emotional tension) and displacement (the diversion of emotions to avoid anxiety), which could lead to an emotional outburst leading to violence.

Whilst the facts and figures may provide some explanation for the aggression experienced recently at events, it certainly doesn’t justify it. Nobody deserves to go to a gig, or a club, or anywhere, and end up being assaulted, robbed, or spiked. Nobody deserves to dread going out or feel uncomfortable at an event. Nobody is to be blamed beyond the perpetrators of such acts, but these things can be prevented. Look out for others, call out any inappropriate behaviour that you witness, and never hesitate to get venue security involved if possible. 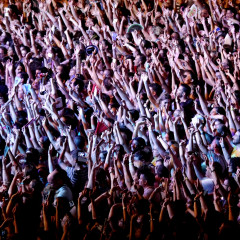 The rise of inappropriate behaviour at live events