The criminalisation of abortion in America may seem quite distant but if we are not careful the UK could be heading the same way.

Roe v Wade is one of the most important rulings in history. In 1973 the Supreme Court made a ruling for abortion rights that, essentially, meant a woman’s right to decide whether or not to keep a baby was protected in the constitution. This allowed abortions between 24 and 28 weeks, and significantly gave women the autonomy to choose. On June 24 2022 Roe v Wade was overturned. Abortions are no longer protected at federal level, ceding power to individual states, and fundamentally people in power, to decide whether abortion is legal or not.

Naturally, this has prompted outrage globally. The decision to restrict the basic human right to have an abortion means that women will be forced to get one through unsafe and often traumatising ways. The decision has angered many in the UK, whilst simultaneously promoting relief in the legality of abortion here. However we cannot be complacent as the situation in the USA could impact abortion rights in the UK.

Prominent politicians such as Nadine Dorries have called for the 24 week cut-off point to be reduced, a tactic used by anti-chocie activists in the USA. Groups who claim to be pro-life emboldened by the overturning of Roe v Wade, are protesting and intimidating women outside of abortion clinics. Women in Northern Ireland and Scotland have had to travel to England because the abortion limit is so low in their countries.

The more you research abortion in the UK the more you realise a woman’s right to choose isn’t as protected as we think. This article aims to examine the barriers that women seeking an abortion face, and why we need to work to further protect abortion.

Firstly, we have to understand that abortion is still extremely limited in this country for some women. Abortion still sits within criminal law rather than being a reproductive right, which opens it up to be challenged. The 1967 Abortion Act made abortion legal but only with the permission of two doctors. Women can get an abortion up to 24 weeks, however if a woman is at risk of mental or physical danger, or if there are abnormalities within the baby it can be facilitated beyond this limit. In Scotland and Northern Ireland there is a different limit. Scotland prohibits second trimester abortions, for example Fife’s limit is 15 weeks. And in Northern Ireland, abortion services still aren’t commissioned properly, despite decriminalisation in 2019. Before that, they could only facilitate early abortions, in which the limit was a mere ten weeks!

It is estimated that 170 Scottish abortion clients have been referred to English services since 2019, and the real number of women who have travelled for an abortion could be higher. Travel acts as a barrier to abortion, an already stigmatised procedure, taking place in an unfamiliar setting for some Scottish women where they are potentially alone. Furthermore, people have to take time off work or cover childcare costs – showing that there are a variety of circumstances that make an abortion a difficult and traumatic experience.

To fully respect a woman’s right to choose, these barriers should be removed, and abortion services should become as accessible as other aspects of healthcare. Additionally, the lack of consistency towards the limit across the UK means the 24 week limit could be challenged. For example, anti-choice activists may contest the cut-off limit in England on the basis that the Scottish one is lower, restricting abortion for further gone women.

A study from the National Library of Medicine outlines that women throughout the UK experience a multitude of barriers when undertaking an abortion. Judgement from your community or hospital staff sometimes deters people from seeking an abortion, especially if they live in a small remote area. Even within the family, threats and violence may stop women from getting an abortion or completing the process. Logistically, long waiting times, or having to travel long distances for appointments can push women over the 24 week threshold in which they can get an abortion. The mental anxiety of getting an abortion over such a long period must be unthinkable.

Nadine Dorries recently commented that the abortion threshold should be reduced by four weeks, Despite claiming to be pro choice. Health care professionals are outraged by her comments. Dani Anderson of the Abortion Support Network states there is no ‘medical basis’ for reducing abortion limits. Furthermore, it poses a serious risk to women’s lives if they seek unsafe abortions beyond the limit.

It is not just Dorries making her opinions heard. Jacob Rees-Mogg has previously commented on abortion as the ‘saddest aspect of modern British life’. People in power stating these views emboldens those who share them, and allows them to gain momentum. This can materialise in protesting outside abortion clinics, and intimidating women exercising their right to choose. More simply the presence of these views in the upper levels of our political system makes the status of abortion feel fragile, and that one day it may be under threat.

The reversal of Roe vs Wade, was facilitated by right-wing justices installed by former US president Donald Trump. The words of Dorries and Rees-Mogg may appear as flippant right-wing statements, yet they hang in the air, with the threat of being put into action.

Anti-choice activists seem to be a group of charged individuals whose voices can do little damage, but underestimating them will only harm abortion’s legality. One group in particular needs to be exposed especially in relation to the vulnerability of women seeking an abortion in Scotland and Northern Ireland. It concerns the growth of Stanton Healthcare.

Stanton Healthcare, part of American organisation Stanton International, is an anti-abortion group that opened its first branch in Northern Ireland in 2014, and is now branching out to Edinburgh. Stanton Healthcare East of Scotland states on their website that they are “here to provide you with alternatives to abortion, advice and practical help.”

Their content and services are vague, but an undercover investigation by The Times discovered they were spreading misleading information. A reporter who visited the Belfast clinic was told she was “too beautiful for abortion” and that a termination would make her breasts “fill with cancer” and cause infertility. They are equally sinister in who they target. Recently they have taken in Ukrainian refugees, helping them learn English. Worst of all they have been granted charity status, giving them a concerning amount of legitimacy.

Which all leads to my final point. Undermining abortion access is a subtle process. You assume that there are a few outspoken groups that are anti-choice, but the culture of these movements is more deeply embedded than we think. If we do not root out these people, or strip charity status from groups such as Stanton Healthcare, they will grow and attempt to extend their influence further. To ensure abortion is truly protected we must not allow groups such as these to influence a woman’s right to choose.

Scotland is trialling a ban on protests outside abortion clinics, although it’s hard to believe this hasn’t happened sooner. These groups will bemoan free speech, but should that come at the expense of other women’s liberty? Their mental health? Their ability to feel safe during an already difficult process? Abortion is not the ‘settled’ matter in law that Dominic Raab suggested, and his complacency reflects a wider misunderstanding of the realities of abortion. If the UK refuses to address the intricacies of anti-choice activism, it will only grow and we may find ourselves in a similar situation as women in America.

Louise McCudden accurately states “the US should serve as a reminder that we in the UK can never take reproductive rights for granted – until abortion is treated like all other healthcare,”

With anti-choice groups and ideas allowed to thrive, and barriers for abortion still very much in place in the UK, abortion is far away from being treated the same as all other healthcare. Therefore, it must be fought for with that aim. The reversal of Roe v Wade should not make us feel satisfied with our abortion laws. Now is the time to critique it, to no longer tolerate groups such as Stanton Healthcare, and fully protect abortion rights once and for all. 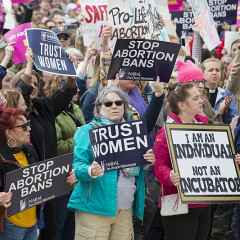 The criminalisation of abortion in America may seem quite distant but if we are not careful the UK could be heading the same way.