Voice MagBlogsLooking back at the…

To celebrate Tom Cruise recently turning 60, we take look at his long and illustrious career

Tom Cruise is one of the most well-known movie stars on the planet today, owing to his long and successful career that has seen him star as some of the most memorable characters in the last few decades. As he recently turned 60, we have a look at his career thus far, from his beginnings in the 1980s with his breakthrough in Risky Business, to his collaborations with auteurs such as Stanley Kubrick and Paul Thomas Anderson in Eyes Wide Shut and Magnolia, and his work as an action star who does his own stunts in the Mission Impossible films (among others!).

Cruise’s first big breakthrough was as the star of the 1983 film Risky Business. His role as the protagonist Joel Goodsen – the high-achieving high school student who decides to have some fun when his parents go on a trip – propelled him into the spotlight. Risky Business was a critical and commercial success, grossing over sixty-three million dollars on a six-million-dollar budget, and was praised as one of the best films of 1983, even drawing comparisons to the much-beloved The Graduate from the likes of Roger Ebert.

In 1986, the Ridley Scott film Legend and Tony Scott’s Top Gun came out in quick succession, both featuring Tom Cruise in a leading role, and the release of the latter especially really solidified his status as a superstar. Top Gun was one of the most popular movies of the decade, becoming the highest grossing film of 1986 and the tenth highest grossing film of the decade. While the critical response wasn’t entirely favourable, general audiences (for the most part) loved it, and Tom Cruise became a household name.

Between 1986, the year Top Gun was released, and 1999, Cruise acted in an average one film per year. While some were much more successful than others, the majority of them were critical or commercial successes or both, and almost all of them featured Cruise in a starring role. He also worked with some of the most successful directors in Hollywood, including Martin Scorsese for The Color of Money (1986), Oliver Stone for Born on the Fourth of July (1989), Stanley Kubrick for Eyes Wide Shut (1999), Paul Thomas Anderson for Magnolia (1999), and Brian De Palma for Mission Impossible (1996) which Cruise also produced.

His run of films from the late 80s to late 90s also saw Cruise nominated for and the recipient of several awards, including two Academy Award nominations for Best Actor for the films Born on the Fourth of July and Jerry Maguire, as well as a nomination for Best Supporting Actor for Magnolia. It’s tough to understate how impressive the run of films Cruise starred in during this time is, and his ability to work with such a range of directors in such a variety of genres and roles is a testament to his ability as an actor.

While the late 20th century saw Cruise working with a wide range of auteurs and putting in masterful performances in dramatic acting, his career since the start of the century has seen him slowly become known for his roles in blockbusters and action movies. Whilst he has continued to work with auteurs such as Michael Mann in Collateral (2004) and Steven Spielberg for Minority Report (2002) and War of the Worlds (2005), his career in general has seen the star gravitate more towards action movies. After both producing and starring in Mission Impossible in 1996, he has done the same for every instalment in the Mission Impossible franchise since, famously performing his own stunts for each film. He also performs his own stunts for other films he stars in, and they have grown increasingly preposterous over the years, which no doubt has contributed to his reputation today as one of the biggest action stars on the planet and an incredible stuntman.

Most recently, Cruise starred in the sequel to the film that first solidified his stardom 1986. Top Gun: Maverick was released earlier this year, and it has become an enormous success, being loved by critics and general audiences alike. It has already become Cruise’s highest grossing film, having made more than 1.1 billion dollars already (and it is still in cinemas!). Cruise also produced Top Gun: Maverick, which, along with his credits as producer on the Mission Impossible films, is perhaps a sign that the reason he has become more inclined to make the films he does now is because he likes to have some degree of creative control or input on what he makes. Working with auteurs may provide more of a guarantee of acclaim and provide more of an opportunity to flex his acting muscles, but it seems that era of Tom Cruise’s career has passed – but so long as he continues to make the best blockbusters and action films around, performing crazy stunts in the process, we can hardly complain, can we? 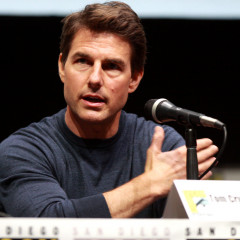 Looking back at the career of Tom Cruise

To celebrate Tom Cruise recently turning 60, we take look at his long and illustrious career